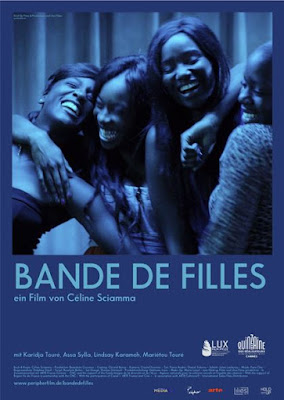 Girlhood – the third entry in Sciamma’s trilogy on coming-of-age and female identity (preceded by Water Lilies and Tomboy), reductively titled in its English translation to perhaps pair it with Linklater’s Boyhood – was brash, sassy and mercurial, even if it felt tad uneven and overdone at times in its narrative choices and flow. The portraiture of a socially and economically marginalized African-French adolescent girl belonging to a working-class family and neighbourhood, and struggling to understand her sense of being, was enchanting and filled with empathy in its best moments. It began on a scintillating note as we see girls fiercely jostling in a game of American football – otherwise stereotyped as a masculine sport – and then breaking into post-match camaraderie. The hyperkinetic opening montage was followed by 16-year old Marieme (Karidja Touré) walking timidly to her grungy apartment, and later being informed matter-of-factly, to her severe disappointment, that high school is out of bounds for her. These emotional extremes immediately defined her life and her world. On one hand, she faces frequent violence from her overbearing older brother, rarely gets to see her single mother who works as a cleaning woman at La Défense, and is ready fodder for the local drug dealer and pimp; however, on the other hand, she experiences joy, acceptance and even freedom as she becomes part of a band of three vivacious, feisty and delectably badass girls – Lady (Assa Sylla), Adiatou (Lindsay Karamoh) and Fily (Mariétou Touré). And, irrespective of how one ultimately judges this film, one is bound to be enraptured as they experience moments of fleeting euphoria together – bonding, having fun, hanging out and even dancing with carefree abandon to Rihanna’s pop-hit Diamonds.