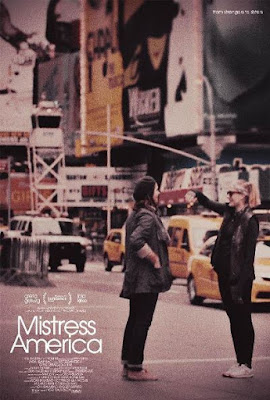 Baumbach’s Mistress America is considered a companion piece to his infectious and brilliant Frances Ha – both were, after all, co-written with Greta Gerwig and centered on compelling female friendships. Their aesthetics, though, couldn’t be more contrasting – muted joys and melancholy of the latter (shot in luminous B/W), as opposed to the latter’s spunky screwball. And, along with Woody Allen, literary influences were palpable too; the premise of a narrator’s infatuation with a person’s effortless and enigmatic effervescence, reminds one of such classics as Fitzgerald’s The Great Gatsby, Capote’s Breakfast at Tiffany’s, West’s The Day of the Locust, etc. Tracy (Lola Kirke) is an enchanting but naïve college freshman and wannabe writer who craves for entry into an exclusive literary club and faces a mini heartbreak when Tony, the boy she started hanging out with, starts dating another girl. Her lonesome life experiences a scintillating stroke of euphoria upon meeting and befriending her soon-to-be step-sister Brooke (Gerwig) – a charismatic, eccentric, vivacious and unpredictable woman who lives at a grungy space in Times Square, dabbles in a multitude of part-time jobs, posts pithy truisms on the social media, and is filled with crazy ideas ranging from feminist comic strip to starting a chic restaurant. Tracy becomes entranced by this older woman who’s either a phony or a prophet (or perhaps a bit of both), and starts hanging out with her while also composing a satirical short story based on her. Though tad uneven – their visit to shallow old friends in Connecticut and Tony’s insecure girlfriend were clearly the weak spots – marvelous turns by the alluring Kirke and the lively Gerwig, and their carefree NYC romp made it a funny, delightful watch.