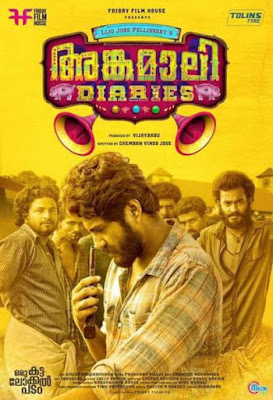 Lijo Jose Pellissery’s Angamaly Diaries is purportedly a crime drama and gangster film; however, what, perhaps, the director essentially intended it to be, is a grimy and darkly funny collage on the eponymous locality in the port city of Cochin in Kerala. In that sense – with its expansive timeline, colourful characters from the crime-ridden underbelly, and idiosyncratic evocations of sights, sounds, flavours and palettes – the inspiration, quite clearly, was Scorsese’s irresistible portrayal of Little Italy in his dizzying masterpiece Mean Streets, and perhaps also the magnetic world of Italian American mobsters in Goodfellas. However, though the constant streak of levity added a layer of irreverent fun to the proceedings, it – along with the rather avoidable romantic asides – were mood spoilers at times (especially because I was anticipating a grittier treatment). The latter Scorsese gem began with the iconic (cheeky) quote, “As far back as I can remember, I always wanted to be a gangster”, and the same was true for the protagonist here, viz. Vincent Pepe (Antony Verghese). Right from an early age he’s fascinated by the area’s strongmen – who’d win football trophies through brute force, and were the local troubleshooters too – and forms a gang of his own with whom he enjoys raucous teenage years and grows into carefree men drawn to inter-faction rivalries, messy brawls, machismo and violence, while trying to get into the pork business. The region’s quintessential cuisine formed a gleeful running motif and driving force for protagonists; that, along with some of its stylized setpieces, and the wildly ambitious climactic sequence – a nearly 12 minute single take that begins with packed street festivities and ends in street violence – formed the film’s most arresting constituents.