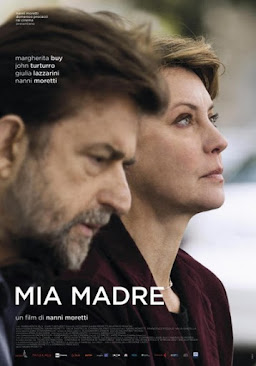 A good film on filmmaking is so often more than just a self-reflexive portrayal – which can be arresting in itself – but an expression of the director’s aesthetic, formal, personal and political views and choices too. From Dziga Vertov’s Man with a Movie Camera, Keaton’s Sherlock Jr. and Wilder’s Sunset Boulevard, and Fellini’s 8 ½, Godard’s Contempt, and Truffaut’s  Day for Night, to Mrinal Sen’s Interview, Kieslowski’s Camera Buff, Kiarostoami’s Close-up and PTA’s Boogie Nights, to even Porumbiou’s When Evening Falls on Bucharest – the list is extraordinary and endless. Nanni Moretti’s warmhearted and wryly self-deprecatory film Mia Madre was also multiple things in parallel – viz. making not just a political film but also politically (to paraphrase Godard), amusing challenges of balancing artistic standpoints with commercial choices and even banality, the futility of compartmentalizing grief and existential crises, memory and mortality. It opened on a terrific note – filled with here-and-now and autocriticism – where Margherita (the stunning Margherita Buy), a well-known filmmaker, is directing an ambitious scene wherein protesting factory workers clash with the police; in a droll quip, she asks the the cameraperson whether she aligns more with the workers or the police on being suggested a zoomed shot of the clashes. Thereon the narrative branched into multiple parallel strands – frustrations on working with a hilariously egotistic American actor (John Turturro); coping along with her gentle-natured brother (played by Moretti himself) the imminent demise of their mother (Giulia Lazzarini), a retired professor of Latin; and renewing bonds with her teenage daughter. Though Turturro’s turn bordered on caricature and the dream sequences were distracting at times, they nevertheless gelled with the broader flow, brilliantly anchored by Buy and suffused with semi-autobiographical touches.