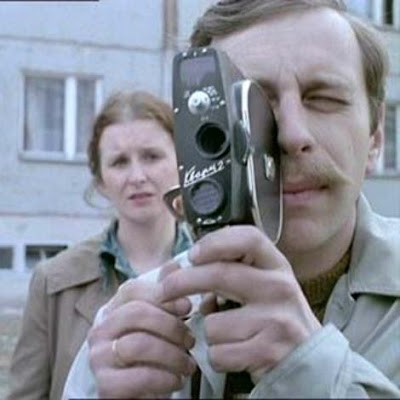 Krzysztof Kieslowski, a towering figure in East European Cinema, began his journey down the road to immortality with Camera Buff, as this wasn’t just the Polish legend’s sophomore feature, but also his breakthrough film. The movie worked at various levels – on the surface, it was a self-reflexive work in that its protagonist is an amateur documentary filmmaker (interestingly, as was Kieslowski himself before he ventured into feature filmmaking); however, in essence, it remains an wonderfully observed and executed satire on surviving in the then-Polish society and in any authoritarian regimes in general, particularly for a non-conformist artiste. Filip Mosz (Jerzy Stuhr), the film’s protagonist, is an everyday Joe who buys an 8-mm movie camera in order to film his newly born child, but he soon graduates to filming seemingly mundane events and life around him – both at work and in his neighbourhood. Ironically, and unfortunately for him, the more adept and passionate he becomes in this activity (he even wins a prize and a contract with a TV-station), the more he starts suffering – he earns the wrath of his boss, while his wife leaves him. Thus, the movie also was a pointed observation on the act of filmmaking too, and how cinema can be a harbinger of unexpected changes – both good and otherwise. This exquisitely photographed and beautifully scored bittersweet film is filled with low-key humour, strongly palpable humanism, subtle poeticism, terrific character development, and sharp socio-political commentaries, and boasted of fine, naturalistic turns by the cast.

One thing this film shows well is that the moment the man behind a camera points that camera to something external to himself in a contrived way, the shot footage ceases to be a faithful documentary of life as it's happening all around and instead reflects the bias of the man controlling the camera. This is why Kieslowski has Filip Mosz turn the camera onto himself to illustrate the fact that even so-called 'documentary' films are in the hand of the director and is in no way necessarily a faithful and true representation of facts. Which brings us onto the question as to whether news reporting today, as seen on millions of television screens in all countries of the world, is really of any true value to its audience. We have been led to believe it is.

Thanks Alexandre for the wonderful assessment of not just one of the themes for this movie but the very act of documentary filmmaking per se. Indeed, even in a documentary film, an artist's influence oftentimes shapes the way it would be viewed/interpreted. But, that in no way means, in my opinion, that documentary filmmaking or news reporting loses any of its value. Agreed, when it comes to news reporting, objectivity (howsoever elusive might that sound) is of paramount importance - but contexualization of the information contained, including first-hand perceptions, etc. add layers to them by making them worth discussions - and hence add value in the process. Nonetheless, the point you've raised is a great topic for debates & food for thought.

And of what value is discussion and debate if it does not have the effect of making a person behave in a better way toward others as a result? It has been my experience that wordy discussion tends to point outward and to discuss external things, almost an avoidance of getting in touch with the internal person that one is, just as Filip's camera acted in his hands, whereas reflecting upon oneself requires not discussion but a silent contemplation alone and away from the distraction of noise and chatter. Which is perhaps why Kieslowski's later films became quieter and quieter. The Double Life Of Veronique, for example, has little to do with metaphysics, metaphors, doubles, doppelgangers, mirrors, dualities as most film critics seem to focus on and much more to do with trying to understand one's loneliness in this world in one's life and the often vain struggle to truly understand oneself. I bid you a very good day and please feel free to add yourself to my Guestbook and add your website details if you wish.

I hope you didn't award a number score to this film, as a mark of value or goodness. It is one thing that irritates me greatly (see my diary post today). They should try such with their wives: “Honey, overall, I think you are a 7.3.” See you. :-)

Thanks again Alexandre for stopping by. I've seen Double Life of Veronique, and therefore having had seen it I'm rather inclined towards the points you've raised about it - that loneliness & understanding oneself are the principal themes of the movie whereas everything else are plot devices at best.

I did visit your wonderful site on Kieslowski, one of my favourite directors, after your last comment. Do consider me as a regular visitor to your site from now on, since Kieslowski is a filmmaker who fascinates me a lot. And yes, I'll add my site & myself to your guestbook.

And yes, I did add a number score to the movie, as I do for every movie I review here. But they aren't a value for the respective movie's "value or goodness" - I'm not that brilliant a critic to even attempt at doing that. Rather, the number simply shows how much I've liked a movie (the reasons for which are briefly spoken about in the reviews) - the number is merely a pointer to how I've reacted to the movie, and therefore what the movie stands as in my humble opinion, i.e. my subjective evaluation of the movies. Hope that explains your query.

A thoughtful answer. I like you. Thank you for your commentaries. There is a film that interests me called A Separation directed by Asghar Farhadi. I may go to my favourite cinema in London to see it when it comes out. It will be the first film I will have seen for a long time such is the quality of film output these days. I may even recommend it on Kieslowski's World. It would be interesting to read of your comments on it. Incidentally, if you have a question on Krzysztof Kieslowski, the actors in his films or what they are up to these days (for example, Irene Jacob) or any film of his, please feel free to 'Start a new post' on the Forum of Kieslowski's World as I do get a lot of visitors from around the world who may be able to help with an informative comment. Un de ces jours.