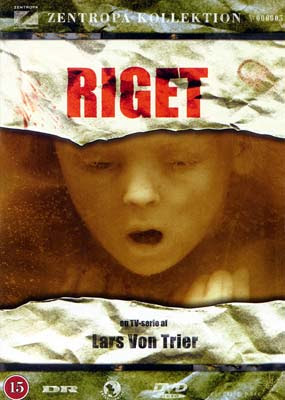 With The Kingdom, the first of the much acclaimed two-part mini-series, Danish enfant terrible Lars von Trier created a wildly original supernatural thriller while also dabbling in gleefully twisted and sardonic black comedy. Set in the titular hospital based in Copenhagen – the largest and most respected in Denmark and the bastion of modern medical science, its ensemble cast portrayed a series of uniquely sketched oddball characters representing nearly the entire hierarchy – a good-natured but perennially confused Chief Medical Officer, an incorrigible Denmark-hating Chief Neurosurgeon, a smart junior doctor who has set-up a mini-establishment of his own within the hospital and is in a relationship with a lady whose pregnancy is progressing at an alarming pace, a rabid professor who’s ready to get a liver with tumour implanted in his body in order to complete his research, the CMO’s socially dysfunctional son who is in love with a much-older nurse, and so forth. Meanwhile an elderly lady, who also happens to the mother of one of the staffs and a self-nominated practitioner of spirituality, senses the presence of the spirit of an unhappy young girl lurking in the hospital, and as she obstinately pursues the girl’s history in order to free her soul, the more she acts as the catalyst of a chain of bizarre and unfortunate incidents. Sepia-toned cinematography played a vital role in creating its eerie and quietly sinister atmosphere and portraying a sense of moral decay, as did the terrific script in bringing forth the director’s grotesque sense of humour. The brilliant final sequence, where the hapless CMO takes government officials around his “model-hospital”, made for a superb finale to the first chapter of this offbeat soap opera.

Nice capsule. A bit more mainstream than his films I think, though the mini-series certainly has an atmosphere and, as you say, humour all of its own. Particularly Ernst-Hugo Järegård's character was amusing to me ( :

I heard Lars Von Trier went into a meeting in Copenhagen with no clue, and when they asked him what film he wanted to make, he looked out the window, and saw the hospital (from The Kingdom), and said, I want to make a film there!

I read in interview book Trier on Von Trier, that his film Europa is about economic power, in The Kingdom the doctor’s power, and in Breaking the Waves religious power. When asked about this,Von Trier said he never set out to make films about power, it just kind of happened.

In case you're interested, I'm planning a Lars Von Trier blogathon later in 2012, I'm not sure I'll rewatch The Kingdom, though. Did you see season 2, or?

I'll have to read that interview one of these days over at wonders in the dark ( :

Thanks a lot buddy. Yeah, this certainly was a more mainstream than most of his movies, but I really liked the way he infused black comedy into the story - thus ensuring it doesn't turn out just another conventional spooky-house horror story. And the acting was good all around; great casting too, I must add!

Thanks for the interesting trivia about how Lars von Trier got the idea for this miniseries - of course, provided that it's true :) And yes, we do try and lead too much into people's works. Maybe a lot of what we interpret come about sub-consciously - and the same could be true about the "power" angle you've mentioned - but that's a valid observation indeed!

I haven't watched season 2 yet, but I plan to watch it soon. And I'd be interested in the Lars von Trier bogathon you're planning. In fact, I also intend to watch Melancholia soon.