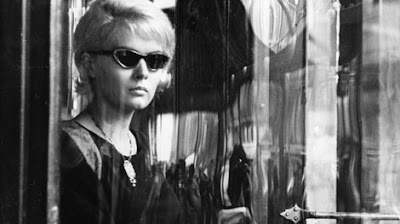 The French Nouvelle Vague movement is renowned for its dare and iconoclasm – after all, Messrs. Godard and Co. attempted to rewrite the very language of the medium. Though Agnes Varda’s Cleo from 5 to 7 did belong to the iconic movement, it would perhaps rank as one of the most simple and unassuming works to have emerged out of it. The movie didn’t have any grand socio-political agenda; rather, by depicting two hours in the life of its titular character, all that the director attempted was portrayal of the inner workings of a woman’s mind and in the process filtering the profound from the mundane. Cleo (marvelously played by Corinne Marchand) is an extremely beautiful but a seemingly shallow and self-absorbed woman, and a famous Parisian pop singer, who is anxiously awaiting the results a clinical examination result of hers. Shot in real-time, and broken into a number of small episodes of varying durations, this is a freewheeling portrayal of the various interactions that she has over the said duration (with her lover, her friends, her professional acquaintances, and even a stranger), as also the entire emotional spectrum that she traverses in the process. Within the first few minutes of the movie it would be easy for most viewers, as it was for me, to form the opinion that she is as frivolous and spoilt as a layperson expects a pop star to be; but, by the time this briskly paced and exquisitely photographed movie (shot in cinema verite style) concluded, I realized that the bitterly lonely and inwardly troubled Cleo isn’t just a charming and pretty face, but also a layered individual with considerable depth of character.

Nice capsule; I think not only we but Cleo herself discover depth as the film goes along. Her confrontation with her mortality brings out a side she probably didn't know she had, or had forgotten.

I think in general the New Wave was probably more humanistic and less thematically ambitious than people sometimes remember - while a few films like Le Petit Soldat (which was banned), Les Carabiniers, and perhaps Vivre sa vie, and Paris Belongs to Us in a roundabout way address broader political or social concerns, most of the New Wave films I've seen are more focused on the personal than the political.

That said - this film does allude to the Algerian war and Varda, along with Resnais (who is obviously a major exception to what I wrote above), belonged to the Left Bank wing of the New Wave, which was decidedly more political than the Cahiers du cinema crowd, and also had deeper roots in the documentary tradition.

Oh, and P.S. I'm doing my blogosphere round-up again this year. What would you select as your strongest post for 2011?

Thanks a lot Joel for the terrific comment and for your stupendous evaluation of the movie. It was a pleasure going through it.

Yes indeed, our journey in terms of discovering the layers that made up Cleo coincided with her own self-discovery process. In fact, because the film is so inherently inward-looking and reflective in nature, though in a quintessentially French (or French New Wave) sort of way, I guess the aforementioned journey for the audience was possible only because Cleo started digging into her mind and her thought-processes.

The degree of thematic ambition in the New Wave is certainly a topic for debate, but I completely agree that most of the movies were deeply humanistic in nature, though in their own unique style. But, technically and stylistically it was a breakthrough movement, as also from intellectual and aesthetic standpoints. And yes, when it came to propounding Leftist sentiments, one can of course never forget Godard himself.

Unfortunately I haven't seen any of Varda's other Nouvelle Vague endeavours. I'm especially interested in watching her Le Bonheur which I hear is a searing examination of marriage & relationships.

As for the blogosphere round-up you're doing, well, its difficult to select one post - in fact, I would pick at least 4 or 5 as the posts (belonging to 2011) I'm most proud of. However, since you asked me to name not more than 1, I'll go with my review of Satyajit Ray's Charulate (http://cliched-monologues.blogspot.com/2011/06/charulata-lonely-wife-1964.html) - not because I consider it as the single strongest piece (it was one of those 4 or 5), but because it was my 500th review at Cinemascope.

Thanks, Shubhajit. I'm trying to keep it to a single "entry" for each but in some cases those entries are for a whole series rather than a single post, so it's up for the blogger to decide.

As for Godard, the interesting thing is that for much of his pre-'68 period his politics were more ambiguous. Even in La Chinoise, there's a hesitation to identify with the Maoists too deeply. The Cahiers crowd was politically ambiguous - Truffaut's initial auteur statement seems positively right-wing, while others were basically apolitical and scornful of the Communist "commitment" favored in intellectual circles in the 50s, and a few were fully left-wing (like Rivette).