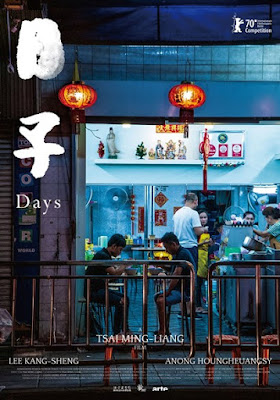 Veteran Taiwanese auteur Tsai Ming-liang forayed back to feature filmmaking after 7 years – he’d vaguely indicated retirement plans upon completing the bleak and edgy Stray Dogs, post which he’d fallen back on shorts – with Days, arguably one of his sparest and most intimate movies. Continuing his exploration of urban alienation, disenchantment and isolation, he stripped the film to its bare bones by composing it as a series of observant, fragmentary, seemingly disjointed sequences; the narrative sparseness and aesthetic austerity were made intensely minimalist through not just his customary long takes – though, quite atypically, he once briefly resorted to jerky hand-held cams – but more so by making it sans dialogues except for ambient sounds and stray remarks, thus making subtitles redundant and hence unavailable. It was also a deeply personal work with its frank sexual intimacy. It’s centered on the parallel lives of two men – middle-aged, well-off Kang (Lee Kang-sheng), afflicted with a physical malaise, that takes him from Taipei to Bangkok for acupuncture treatments; and the much younger Non (Anong Houngheuangsy), a Laotian immigrant in Bangkok – who, despite their divergent social classes, were bound by their lonely, spartan lives. Hence, when their paths eventually cross – upon Kang hiring Non for a massage – their liaison was physically charged, but also with subtle emotional undercurrents. The touching reference, therefore, to Chaplin’s late-career gem Limelight – in the form of a parting gift that plays its lilting score – added a rare sentimental touch. As an interesting aside, Lee was actually suffering from pains, which added underlying authenticity to his magnificently controlled expressions; and Tsai’s discovery of Anong – a younger version of Lee – was as fortuitous as his meeting Lee over three decades back.