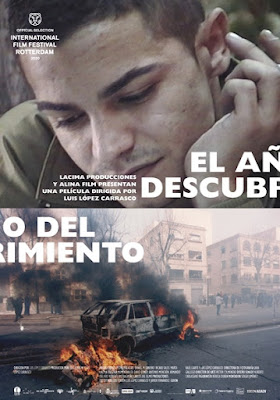 1992 was a watershed year in Spain’s contemporary political history. On one hand its “thriving democracy” and “booming economy” were flamboyantly announced – 17 years after its fascist Generalissimo’s death – by hosting two spectacular international events, viz. Sevilla Expo and Barcelona Olympics; and yet, unbeknownst even to most Spaniards, this year also witnessed the devastating culmination of its neoliberal policies, which especially manifested in Cartagena through closure of national industries, massive job losses and seething collective anger among the disaffected working class, which exploded in the form of tremendous street protests and ultimately burning of the region’s autonomous parliament. Luis López Carrasco’s radically brilliant, politically trenchant, formally audacious and magnificently crafted documentary The Year of the Discovery examined – through memories and cutting dialectics – the other side of that tumultuous year… and in turn, a host of troubling episodes from Spain’s past, from the repressive and odious Francoist dictatorship years to the crippling 2008 recession. Through enthralling free-flowing discussions and interviews – in a semi-staged setting partly reminiscent of the Ross’ intoxicating Bloody Nose, Empty Pockets, real people selected from Cartagena’s working-class neighbourhoods were deliberately assembled at a tavern there, and the interactions and stories over cigarettes and drinks, which were fiercely real but elicited through planned interventions, were shot over a couple of months – Carrasco captured a complex mosaic interlacing the personal with the political. In further extraordinary stylistic choices, this 3 ½ hour work was shot using analog Hi8 which imbued it with amateur home video looks, the conversations were presented using intricate split-screen compositions, and the proceedings were often inter-cut with real footage from the ferocious unrest, news clippings and even, ironically, cheesy official ads from the period.