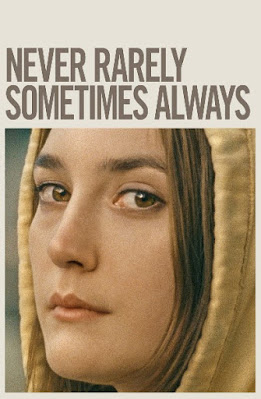 Watching Never Rarely Sometimes Always, one can’t help but be reminded of Mungiu’s ferocious masterpiece 4 Months, 3 Weeks and 2 Days, despite their distinctively different formal and tonal palettes. Both films, of course, were steadfastly centered on the topic of abortion, and in turn on the oppressive patriarchal desire to control women’s agency, autonomy and choices; but, that obvious commonality aside, both portrayed just the abortion without either clarifying what happened previously (thus defiantly making the reason for pregnancy secondary to the protagonists’ choices) or showing the consequences of their decisions (thus relegating social reactions too as secondary). Autumn (Sidney Flanigan), a troubled 17-year old loner, is struggling with her identity and space in a conservative Pennsylvania town and a hostile family environ courtesy her potentially problematic step-father. Hence, upon confirmation that she’s pregnant, she doesn’t just decide to terminate – despite the dishonest efforts of the dubious lady at the local clinic – she must also independently take bold measures because parental consent is mandatory there for minors. Fortunately she finds terrific support from her spunky cousin Skylar (Talia Ryder), who pilfers some cash from the supermarket where they work to sponsor their trip to New York City for a secret abortion. The road trip, nights they spend riding subways and playing video games and aimlessly ambling around, and finding funds for their return, delicately counterpointed the purpose for their visit. The static single-take shot – with an extreme close-up silently capturing Autumn’s extreme vulnerability and the volley of emotions behind her defensive resolve – where she must answer with responses that formed the film’s title, was an especially emotionally wrenching moment in this searing, honest, understated and heartwarming work.