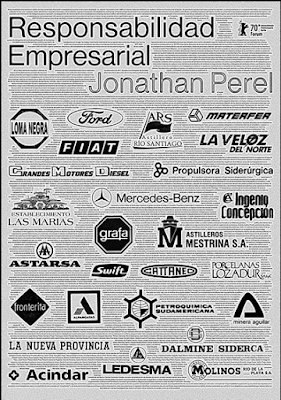 The right-wing military dictatorship that was established in Argentina through the 1976 coup d'état, wasn’t just a macabre period filled with human rights violations and brutal repressions, it was also marked by brazen collaborations by private and civil sectors with the junta; no wonder, it’s called a “civic-military dictatorship”. Directed by Jonathan Perel – who’s steadily building a body of work documenting the “Dirty War”, reminiscent of how Guzmán steadfastly devoted his entire filmmaking life or Saura for a significant stretch to the Pinochet and Franco dictatorships, respectively – the ironically titled Corporate Responsibility is a telling mix of formal rigour, guerilla filmmaking, investigative journalism and defiant political activism. Based on the excerpts of a report which was never allowed into circulation, it unequivocally covered the above subject – viz. the nefarious collusion and irrefutable culpability of various organizations, including a few renowned global ones – through 25 “case studies” across the country. Each chapter opens with the company logo, followed by long static shot of the industrial site’s entrance secretly filmed from inside a car – with the colour palette’s brilliance accentuated by shooting them at dawns and dusk – and accompanied by Perel’s deadpan voiceover detailing the multiple accounts of grotesque misdeeds carried out against dissident workers and dissenting voices. Thus, by perpetuating the regime’s ugly agenda – through abductions, forced disappearances, murders and even tortures conducted in detention centers built within their campuses – it formed a microcosm of the state itself, while in turn conveniently reaping rewards through statization of debts, reduction in wages and increase in productivity. The film, by the way, quietly reminded me of Patricio Pron’s melancholic memoir My Father’s Ghost is Climbing in the Rain, through their shared political memories.