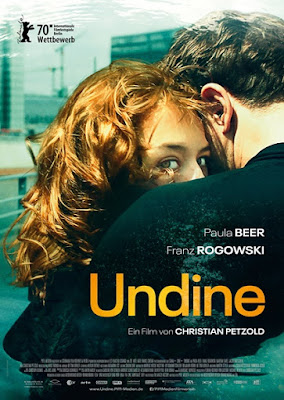 Anyone acquainted with Petzold’s filmography would be aware of his penchant for interpreting and chronicling German sociopolitical history – covering WW2, Cold War and present day – through tense, compelling and classical narratives. However, while his previous movies were predominantly situated in specific contexts, albeit transfused with allegorical portrayals, he made a dramatic formal detour – resorting to magic realism and overt metaphors – in his serene, immaculate, restrained and involving, but also at times thematically distracting and symbolism laden, Undine. Its enigmatic titular heroine Undine (Paula Beer), a Berlin historian and public guide at the Märkisches Museum, has an eerily mysterious – and, possibly, supernatural – background, and that’s alluded to at the outset where she coldly berates her fiancé – who’s possibly fallen for another woman – that she’ll have to kill him if he doesn’t return to her. Though the guy still goes ahead and leaves her for his new lover, she gets temporarily distracted upon a chance encounter with Christoph (Franz Rogowski), an industrial diver who was magnetized by her latest lecture – around the evolution of Berlin’s architectural landscape over the ages – which he attended out of happenstance; and that quickly blossoms into a romance that engulfs the two loners. Their shared tranquility, however, gets shattered before long, as is wont to happen in a brooding, tacitly ominous work such as this. Petzold intriguingly positioned the film beyond a dark fairy tale by imbuing mundane realism into the proceedings, and more so, through invigorating politico-historical discourses wherein intricate models of Berlin formed key components. The latter aspect added underlying allegory into the tragic and mythological love story; and that, in turn, was aided by the impending sense of doom and Beer’s striking turn.