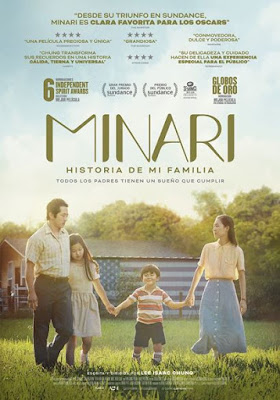 Minari, culled by Korean-American filmmaker Lee Isaac Chung from his childhood experiences, was neither grand nor overly dramatic despite the storyline’s inherent epicness. It was a restrained, subdued, quietly told tale, even if the plot – with its emotional underpinnings, straightforward familial inter-dynamics, and pursuance of “American Dream” – followed a rather conventional arc.  Chung nevertheless did well in retaining a sense of simplicity – instead of being simplistic and falling fully into overused traps – which made it for most parts a sincere, engaging work. Set during the 1980s, it begins with a Korean immigrant family – comprising of Jacob (Steven Yeun) who’s desirous of making an entrepreneurial leap, his fiercely independent-minded wife Monica (Han Ye-ri), their young daughter (Noel Kate Cho) and restive kid son (Alan Kim) who has a heart condition – relocating from California to rural Arkansas. Jacob has set his mind into becoming a self-made farmer focusing on produce aimed at the Korean-American food market; and hence, with that goal in mind, they move into a trailer van and an uninhabited plot, even at the cost of alienating his wife who’s already on the edge for his taking such a radical decision without bothering to discuss first. Paul (Will Patton), a neurotic born-again Christian who joins as farm help, and Monica’s irreverent, mischievous, adorable mother (Youn Yuh-jung) – in a slightly tampered down version of the eccentric grandmom roles that Kirin Kiki has made her own in Kore-eda’s filmography – who joins the family, added spice to the unfolding family drama. Yeun, fresh out of his brilliantly creepy turn in Lee Chang-dong’s stupendous Burning, and Yuj-jung provided fine turns, while the gently evocative aesthetics complemented the delicately strung – if politically bland – movie.