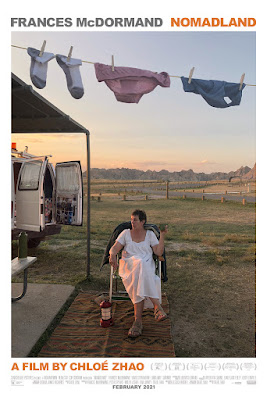 The most absorbing aspect of Chloé Zhao’s restrained, layered and painfully beautiful neo-Western Nomadland – adapted from Jessica Bruder’s acclaimed non-fiction book – lay in how it was imbued with seemingly contradictory aspects; grand in its narrative scope and yet intimate in its portrayals, underlying political observations vis-à-vis humanist overtones, and docu-fictional form. This last aspect especially stood out considering that Zhao essentially crafted a fictionalized central tapestry in an unambiguously real setting. And, with its fierce, painful story of a woman – drifter, rebel and outsider who’s fallen out of the grid – it made for an excellent companion piece to the likes of Varda’s Vagabond and Reichardt’s Wendy and Lucy. The tale’s protagonist Fern (Frances McDormand) is an alienated middle-aged woman who lost her life and livelihood when the US Gypsum plant in Empire, Nevada, shut down – turning the place into a ghost town – and the death of her husband whose memory still haunts her. These, exacerbated by the devastating 2008 economic meltdown, has meant that she now earns pittance through part-time gig employments; and she’s complemented that with the radical choice to live a defiantly rootless life out of a campervan. In the course of her cross-country journeys she befriends people – including such fascinating real-life nomads playing themselves as the freebird Linda May, the fearless Swankie and vandwelling guru Bob Wells – learns survival skills, combats loneliness, experiences epiphany, briefly reconnects with her bourgeois sister and finds tentative companionship from a soon-to-be granddad (David Strathairn). The stunningly photographed vistas, elegiac score, brilliant naturalist turns and meandering structure, made the film’s existential inquiries and melancholia all the more eloquent; some, however, have complained about Zhao’s downplaying of the book’s bristling political commentaries.