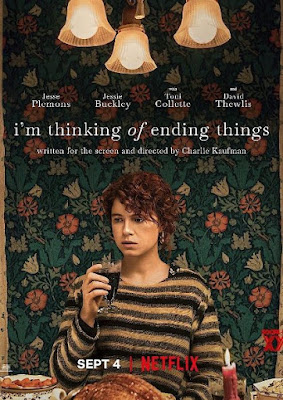 I’m Thinking of Ending Things – though adapted from a Iain Reid novel – is a through and through Charlie Kaufman movie; multiple versions of an individual’s self-awareness, identity crisis, meta references, solipsism and game of one-upmanship within one’s mind are all there, along with abundance of gleeful weirdness and neurotic characters. And yet, like the startling bravado but messy over-ambitiousness of Synecdoche, New York, this too provided another underhanded indication that a Spike Jonze (Being John Malkovich, Adaptation) or a Michel Gondry (Eternal Sunshine of the Spotless Mind) is essential to provide a canvas for his sheer ingenuity while also tampering his unbridled idiosyncracy and self-indulgence. The film, therefore, reconfirms Kaufman’s zany brilliance as a daring writer as well as his self-combustibility as a director. It starts off with a striking, intelligent and self-assured woman (Jessie Buckley) – whose name and vocation keep fluctuating – going on a road with her impassive, dour and infuriatingly knowledgeable boyfriend Jake (Jesse Plemons) to visit his hilariously unhinged parents (Toni Collette and David Thewlis) who live in an isolated house in the middle of nowhere, while all along contemplating her unspoken wish to end their sagging relationship. The proceedings, as anticipated, become increasingly more eerie, wacky and ultimately bizarre, with time, space, perceptions and memory forming Kafkaesque knots which were darkly funny, viscerally nightmarish and deliriously compelling at certain parts and exasperating, cold, outlandish and overly self-conscious in its plethora of pop-cultural allusions at others. That said, Kaufman extracted excellent turns from all, with Buckley and Collette’s being the standouts of the lot, the art design was sumptuous and the bleak, wintry atmosphere was positively ominous for most parts until Kaufman decided to go bonkers.