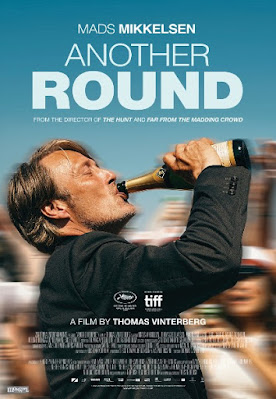 Thomas Vinterberg’s Another Round – alternately dreary, poignant, mellifluous and uplifting – remains as much a bittersweet ode to existential predicaments borne out of mid-life crisis as a wryly humorous commentary on alcoholism. Hence, despite its central tenet of gradually and inevitably sliding into the wrong end of the bottle – albeit, initially under the ironic and self-deluding guise of academic experimentation – and facing health, familial and professional repercussions thereof, it essentially was a tragicomic portrayal of ageing, marriage, friendship and challenging social conformity. Martin (Mads Mikkelsen), a middle-aged history teacher at a Copenhagen high school, is literally sleep-walking through his life – his marriage to his childhood sweetheart (Maria Bonnevie) has grown stale, his kids rarely interact with him anymore, and his students are bored by his lackadaisical pedagogy. Hence, when, during a celebration with his three closest buddies and fellow colleagues – English teacher Peter (Magnus Millang), music tutor Peter (Lars Ranthe) and sports instructor Tommy (Thomas Bo Larsen) – an offhand remark is made about an oddball research theory arguing that human blood is 0.05% alcohol deficient, he becomes the first person to literally take it up and surreptitiously starts taking a swig of vodka at work. However, surprisingly, the other friends too decide to undertake this hilariously absurd but melancholic experiment… things, therefore, are bound to go downhill soon even if they seem darn funny to start with, and that’s what made the film emotionally absorbing on one hand, and decidedly old-fashioned on the other. The grimy realism added an unconventional flavour to the drama which ended with a euphoric finale, and the cheeky but straightforward narrative was bolstered by terrific turns by all and an especially standout one by Mikkelsen.