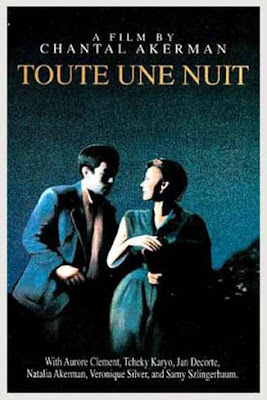 Toute Une Nuit – Chantal Akerman’s mellifluous peek into the momentary, the ephemeral, the illusory and the transitory when it comes to romance, passion, amorous flirtations, solitary longings, heartbreaks and estrangements in their multifarious expressions – remains a beguiling interplay between minimalism and maximalism. On one hand – akin to the Belgian filmmaker’s signature formal approach – it’s muted, understated, elusive, shorn of details and expositions, and devoid of stylistic or narrative flourishes; on the other hand – and this is what possibly made this such an unconventional entry in her oeuvre – it relied heavily on precise mise-en-scène, meticulous editing and intricate narrative architecture, considering its massive ensemble cast. The resultant work – filled with a dizzying string of tantalizing vignettes – was a hypnotic symphony of fragmentary emotions covering euphoria, joy, melancholy, regrets, loneliness, ennui and banality. Set over the course of a single torrid summer night in Brussels, we witness an engrossing array of fleeting encounters and loosely strung tableaux – of strangers meeting for short drinks at taverns or aimlessly dancing to lilting music, lovers spending nights at shabby hotels only to part ways later, married couples either rejuvenating their love gone stale or deciding to move on, clandestine lovers experiencing joy or indecision, a man leaving a note under the door only to be met by his rushing sweetheart a few steps later, a disillusioned wife leaving on a whim only to return at dawn, a man sleeping alone in his decrepit apartment waiting in futility, etc. Gorgeously shot in grainy, washed out blues, and bereft of narrative contextualization and continuity, this may perhaps be best described as a succession of shorts stitched together for a whole decidedly larger than its tantalizing parts.