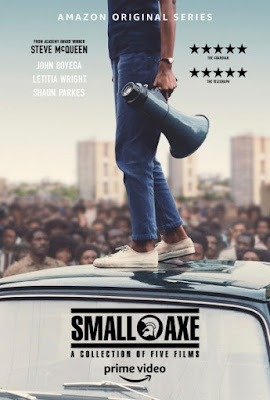 Steve McQueen’s terrific debut feature Hunger, where he’d chronicled IRA member Bobby Sands’ defiant protests against the British state, had established his ability to situate ‘activism filmmaking’ within a narrative framework, as did his well-received 12 Years A Slave. And all those traits – the sense of here-and-now, political contexts, anger, storytelling, etc. – were amply evident in Mangrove, the rousing and solidly made first chapter in his ambitious ‘Small Axe’ anthology. The series as a whole, and hence this film too, is centered on West Indian immigrants in 70s and 80s London. The immigrant experience, therefore, formed a vital aspect – be it their cultural distinctiveness and the desire to create a sense of community, or, for that matter, the xenophobia, prejudices and racism that they invariably encounter from those – the police, in this case – who treat them with suspicion, disdain and even systemic bigotry. The titular Mangrove was a restaurant specializing in Caribbean cuisine that Frank Crichlow (Shaun Parkes) had established in Notting Hill; it soon transitioned into a melting pot for the immigrants to drop by, hang out, create music and engage in lively political discussions; Bob Marley too was known to drop by at times. Consequently, while it became an iconic cultural institution, it also attracted harassment and raids on spurious grounds by the proudly racist cops. And, upon daring to protest, they were promptly accused of riot and violence, thus eventually leading to the landmark Mangrove Nine trials. This broad arc was enriched with striking zeitgeist and stirring undercurrents, and brought forth through excellent performances led by Parkes, Letitia Wright (as British Black Panther leader Altheia Jones-LeCointe), and Malachi Kirby (as political activist Darcus Howe).