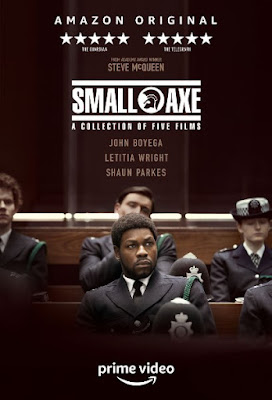 After the euphoric exuberance of Lovers Rock, McQueen returned to historical drama and docu-fiction for the gripping and angry third entry in his ambitious Small Axe anthology. The pentalogy’s first entry Mangrove, in fact, formed an interesting complementary piece to this, in that both were centered on the systemic racism and bigotry within the London Police and the respective protagonists’ dare to confront that through bold, affirmative actions; however, while the former provided an outside-in view through the lens of the ‘Mangrove Nine’ victims, the latter provided an insider’s peek instead; further, instead of an ensemble approach, the POV here was tightly focussed on two men. The movie followed a few years into the life of Leroy Logan (John Boyega), son of Jamaican immigrant Ken (Steve Toussaint), who, in his fervent desire to bring changes to the cops’ treatment of ethnic minorities and immigrants, took the astoundingly courageous decision to quit a budding career as a researcher and join the force instead. A change as enormous as this, unfortunately, isn’t as easy as one dreams, and that’s something he realizes first-hand – unambiguously – once he’s inside. In a compelling parallel thread, it also deftly portrayed the deep-set antagonism and suspicion that the Black community felt towards the police, and this was especially manifested in Leroy’s complex relationship with his dad – who never feared standing up to racist bullies and even faced a vicious attack in the process – and hence found it especially unsettling when his own son crosses over to the other side and becomes a part of “them”. While a reasonably conventional film with a straight-up narrative, it gained tremendously from the superb turns by its two lead actors.