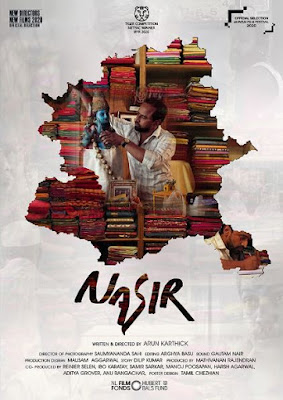 Tamil filmmaker Arun Karthick’s Nasir – incidentally the 2nd sophomore feature by a young Indian filmmaker that I’ve now watched in succession, after Chaitanya Tamhane’s immersive The Disciple – was laced with such deftly muted fatalist undercurrents and simmering inevitability that one might as well rename the film ‘Death of a Salesman (whose fate is sealed)’ (to borrow the title of Arthur Miller’s famous play). Through portrayal of a seemingly random day in the life of its eponymous protagonist Nasir (Koumarane Valavane) – one that’s filled with mundane activities, chores at the clothing shop he works at, a few “personal” moments amidst the routine of his lower-middle class existence in the city of Coimbatore, be it with his wife who’s leaving for few days, or his mentally challenged son, or discussing job opportunities at Dubai with an old acquaintance, or reciting poetry that he’s himself composed – that begins innocuously but ends on the most horrible note imaginable. Yet, as the background noise, stray conversations, political slogans and news announcements reveal, he’s been living within a combustible keg all along – viz. the poisonous but tragically normalized climate of unabashed (and entrenched) hatred, bigotry, socio-religious prejudice, Islamophobia and "otherization" perpetuated by aggressive populist majoritarian nationalism – which was always boiling up to this… just that Nasir, not because of any specific actions directly attributable to him, but by simply being a member of the “other”, gets shockingly subsumed and massacred by it. Thus, through this minimalist slice-of-life – adapted from Dilip Kumar’s short story A Clerk’s Story – Karthick took the vital stance of positioning Nasir’s victimization as an interconnected dot within a larger narrative which, despite its devastating culmination, was sadly neither isolated nor utterly unanticipated.