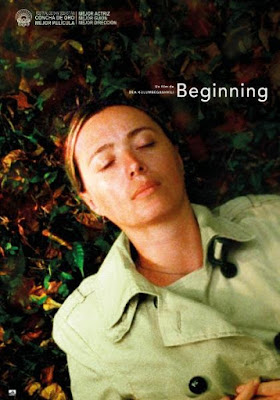 Déa Kulumbegashvili’s marvelous debut feature Beginning – with its rigorous minimalism, austere aesthetics, languorous pacing, brooding undercurrents, visceral unease, moral quandary, narrative ambiguities, and bleak, troubling exploration of faltering faith – had shades of masters ranging from Bergman and Tarkovsky to Tarr and Haneke; yet, for all its influences, the striking Georgian filmmaker stamped her voice by suffusing the proceedings with ferocious feminist underpinnings. The movie began on electrifying note as a Jehovah’s Witness congregation, at a picturesque pasture outside Tbilisi, faces petrol bomb attacks by religious extremists, while they’re in the middle of a didactic sermon on the Old Testament story of Abraham and Isaac by its stern leader (Rati Oneli, who also co-wrote the script along with Déa). The protracted burning sequence set the tone, mood and context brilliantly, including the clear subtext that this tightly-knit minority community faces regular persecutions by the Orthodox Christian majority and prejudiced officials. The POV thereafter resolutely shifted to the pastor’s wife Jana (Ia Sukhitashvili), and we see her tremendous emotional, psychological and spiritual struggles, considering her daily battles between religious obedience and increasing disillusionment; and this was juxtaposed not just with the societal bigotry and pedantry surrounding her, but also – perhaps most importantly – the patriarchy and misogyny that she experiences as a woman, wife, mother and daughter. Specific to the latter, her life is bound to her boorish husband, her young son preparing for baptism, a man who starts sexually assaulting her, and her dead father whose uncouth behavior continues to plague both her and her aged mother. The film’s disconcerting themes were complemented by stark visuals and long takes, punctuated by nerve-racking violence, and held together by Sukhitashvili’s terrific central turn.