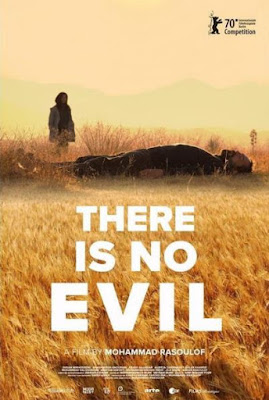 Dissident Iranian filmmaker Mohammad Rasoulof’s There Is No Evil – unsurprisingly banned in his country – was a magnificently crafted anthology film suffused with rousing political defiance, dramatic power and existential melancholy. However, what perhaps stood apart was its remarkable thematic clarity, viz. unequivocal opposition to capital punishments. The film comprised of four chapters – disparate in terms of premise and tonality – except that they were all exquisitely bound by their quietly resolute thematic convictions and their deliberately paced narrative buildups that always ended with startling twists. The first chapter, made in the form of a family drama, chronicled a seemingly average day in the life of middle-aged married man (Ehsan Mirhosseini) whose seemingly mundane life belies his hideous profession; the second chapter, fashioned as a thrilling prison-break film, was centered on a young soldier (Kaveh Ahangar) who must take a reckless route to avoid executing a doomed prisoner; the third chapter, presented for large parts as a blossoming romance, sees another young soldier, making an unannounced visit to his vivacious fiancée’s place, only to learn of a disquieting death; and the riveting final chapter, moodily orchestrated as a family reunion, portrayed a young woman spending few days with her mysterious uncle who lives a fiercely secluded life thanks to something he did – and didn’t do – many years back. Each episode was distinctively striking – the first for its shocking coup de théâtre and depiction of banality of evil, the second for a euphoric finale ecstatically accompanied by the antifascist resistance anthem ‘Bella Ciao’, the third by the realization of the devastating consequences of blindly following orders, and the final by its complex meditation on the oftentimes massive cost of displaying moral courage.