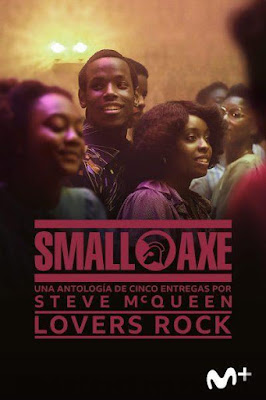 Lovers Rock, the magnificent second chapter in McQueen’s ‘Small Axe’ pentalogy – his politically committed anthology on Caribbean immigrants in London during the 70s and 80s – couldn’t have been more resoundingly different vis-à-vis the rousing anger of the previous movie Mangrove. Sensuous, intimate, immersive, hypnotic, exuberant and boldly dabbed with impressionistic splashes – this ravishing sensorial experience might just be the cinematic equivalent of a stream-of-consciousness novella, or perhaps more appropriately, a bluesy reggae performance with a progressive tempo played in a packed, smoky, sweat-soaked, dimly-lit space, as that’s what this rapturous film essentially was. And, what made this especially beautiful was in the way McQueen so gently but unequivocally infused stirring political contexts and undercurrents into it. The pint-sized film is centered almost completely on a house party at a Ladbroke Grove mansion, organized by and for the city’s West Indian immigrants; that they were discriminated against and often even disallowed access to most of London’s famous live-music scenes, was a key reason behind private house parties like this. The gorgeously photographed revelry witnesses a bit of everything – flirtations, teasing foreplay, romance, rivalries, dirty dancing, carefree abandon and a couple of troubling moments too; and, in the midst of these, we also joyously witness the budding love story between Martha (Amarah-Jae St. Aubyn), who belongs to an orthodox religious family, and Franklyn (Michael Ward), a blue-collar shopfloor mechanic. What, therefore, clearly underscored were the attendees’ rebellious self-expressions and craving for an illusory freedom. The film was suffused with a number of musically engrossing sequences, including the seductive rendition of Janet Kay’s ‘Silly Games’ that ends with an extended capella, and guys dancing with electrifying abandon to the Revolutionaries’ ‘Kunta Kinte’.