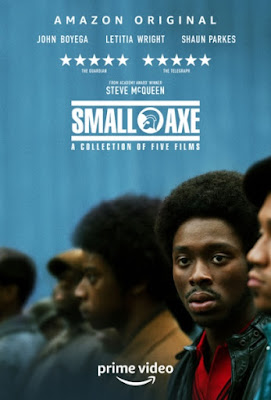 In the previous ‘Small Axe’ chapter, viz. Red, White and Blue, McQueen had portrayed the transformational period of a guy who’s clear about his path. In the series’ penultimate chapter Alex Wheatle, contrarily, he captured a similar period for another guy who’s completely lost, is in an existential flux, and is struggling to find his identity and place in the milieu that he exists. The focus of this biopic is on the younger days of eponymous British-Jamaican novelist, well before he became a well-known writer. It begins with an alienated, angst-ridden Alex (Sheyi Cole) being thrown into prison, and using this as the key narrative hinge McQueen chronicled what brought him there and how that provided new directions to his life. We thus get to know about his Dickensian childhood at an orphanage; how he sheds his faux British façade and imbibes his Caribbeanness – in the form of gait, attire, accents, etc. – under the aegis of a friendly Brixton hustler (Jonathan Jules); his growing passion for reggae music; the tremendous rage he experiences on account of police apathy upon the arson at a New Cross house party in which 13 black youngsters died; and his involvement in the furious 1981 Brixton riots – brought forth through stirring B/W photographs – which gets him arrested. And, these episodic flashbacks were counterpointed with his unlikely friendship with his cellmate – a hulking, gregarious, sympathetic bibliophile and Rastafarian (Robbie Gee) – who urges him to discover his roots by reading. While the film felt tad disjointed at times and could’ve done with deeper examinations – thus making this a relatively lesser effort in comparison – the strong performances, authentic period recreations and pulsating score made this, nevertheless, interesting.