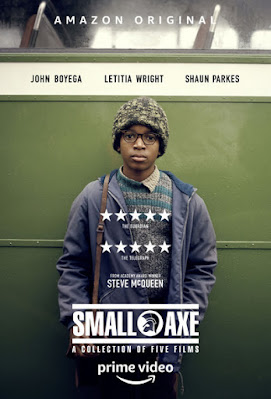 McQueen brought his ambitious, exhilarating, topical and undeniably personal ‘Small Axe’ anthology series to an unassuming and gently evocative finale – on a subject as important and troubling as any – with Education. Compact in length like the previous three entries (only Mangrove, the fiery first episode, had a more conventional feature-length runtime), this was in a way similar to Lovers Rock. They were the only two films in the series where the premises were based on actual incidents but the stories were otherwise fictionalized, focusing – like the anthology itself – on different manifestations of systemic racial prejudice, bigotry and xenophobia faced by West Indian immigrants in 70s and 80s London; that apart, though, they couldn’t be further apart given the latter’s gloriously free-form style. 12-year old Kingsley (Kenyah Sandy) faces regular admonishments at school for being slow in his reading and for his love for fun. However, when his principal informs his mother Agnes (Sharlene Whyte) that he’ll be transferred to a different school which’ll cater to his “special needs” and she begrudgingly agrees, he’s unhappy on being separated from his friends. This relocation, though, was as part of an unofficial policy of segregation of black children, by some London councils, by classifying them as “educationally subnormal”, which is eventually revealed thanks to two passionate black sociopolitical activists (Naomi Ackie and Josette Simon). The title, therefore, referred to “education” on two fronts – that of the kid (ironically speaking), and, in a way, of the distraught mother too. Though a largely straight-forward work, it nevertheless had one moment of wry, deadpan improvisation, viz. an extended rendition of “House of the Rising Sun” by a haggard teacher that was alternately hilarious and annoying.