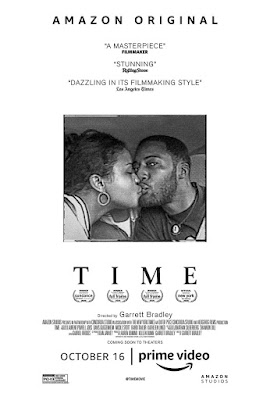 When it comes to depicting the prison-industrial complex, the premise is usually always built around person(s) incarcerated under false pretexts. However, the portrayal becomes incredibly more complex when the carceral system is critiqued without associating victimhood with innocence – along the lines of Capote’s denunciation of the grotesquerie of capital punishment in his unforgettable masterpiece In Cold Blood and by Herzog in Into the Abyss – and that’s essentially what Garrett Bradley accomplished in her achingly beautiful, deeply poignant, politically vocal and passionately dissident essay film Time. It confronted this topic from the outside – through people affected by disproportionate, racially loaded punishments – despite situating the locus squarely within the Louisiana penitentiary (which appeared like a military base from its aerial shots). In 1997, Sibil and Robert Richardson – a young African-American couple – recklessly decided to rob a bank out of financial desperation. They were of course caught and found guilty; she got 12 but got paroled in 3 ½ years; he, unfortunately, was served with a horrendous sentence of 6 decades without parole. Over the next 2 decades Sibil – a single mother of 6 exceptionally groomed boys – became a successful entrepreneur, a defiant activist against the harshly punitive and brazenly prejudiced nature of the criminal justice system – reminiscent of Joan Baez’s powerful protest song Prison Trilogy – and a tireless advocate to get her husband’s mammoth sentence reduced. The heartwarming mosaic of grainy, B/W home video sequences that it’s interspersed with, accompanied by gorgeously bluesy score, marvelously established the melancholic passage of time and the tale’s heartwarming intimacy. As an interesting aside, there’re even a few playful self-referential elements and performative moments that made this so much more than just a human story.