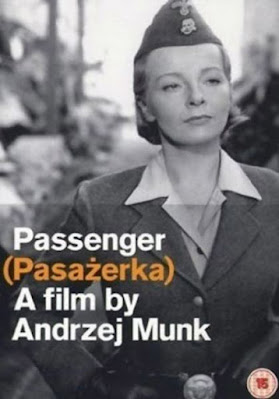 The blurring and mythologization of events through conveniently subjective filters of memory and perception – thus leading to multiple versions of truths – formed distinctive threads in Munk’s formally audacious oeuvre. It remains therefore such an enormous tragedy that he left behind just three completed films – his brilliantly ironic debut Man on the Tracks; the virtuoso diptych Eroica; and his subversive, darkly funny masterpiece Bad Luck – before his untimely death while he was mid-way through his next feature. Passenger, his unfinished final film – a joint adaptation with Zofia Posmysz from her radio play Passenger from Cabin Number 45 – persisted with the above-mentioned motif, with politics of memory around the Holocaust also forming a crucial element. It begins with Liza (Aleksandra Śląska), a German woman traveling on a luxury liner with her wealthy husband – who barely knows about her sordid past, viz. that she was a Nazi officer at the Auschwitz – in her first trip back to Europe since WW2. Her existential veneer, however, starts collapsing upon spotting a woman in the ship – who reminds her of Martha (Anna Ciepielewska), a defiant Jewish inmate from the camp – and she starts revealing her dark past. Yet, interestingly, she initially shares a more heroic version, though what actually transpired was murkier than that. Munk was able to film the two bleak flashbacks, which were stitched together; he, though, had further versions planned which couldn’t be made. The wryly satirical “present”, contrarily, was half-done; this part, consequently, was depicted through eerily grainy B/W photographs, accompanied by a deadpan voice-over, and that, on hindsight, aptly complemented the satirical tone. Watching this tantalizing gem one can only ruefully wonder how many more blazing stuff Munk could’ve made.