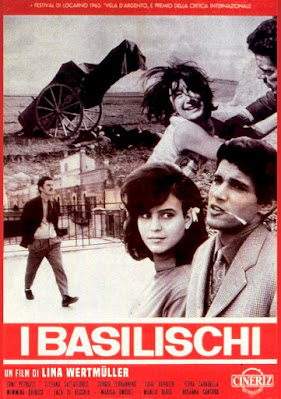 Lina Wertmüller’s intriguing neorealist debut The Basilisks was infused with both playfulness and bitterness, and the juxtaposition of these two contrasting tones made this a work of interesting dichotomies that pervaded through its length – be it in its form, viz. interplay between vérité filmmaking and poetic realism; its theme, viz. the wish and allure to escape from the mundane vis-à-vis the inability and even unwillingness to truly leave; and its political context, viz. the cohabitation of post-fascist Italy and earlier feudal lifestyles. These alternative aspects were especially manifested by the film’s setting in southern Italy, with its curious tussle between the winds of changes brought in by the then climate and yet steadfastly holding on to disappearing mores and customs; and more specifically the town of Palazzo San Gervasio, which, with its striking medieval edifice, ragged stone structures, community existence and sleepy flow, seemed to be stuck somewhere indeterminate between desolation and old-world charm. The lazily paced tale – gently laced with existential ennui and aimlessness – was aptly contrapunted by its three drifting friends, viz. the young and dreamy Antonio (Antonio Petruzzi) who’s perpetually in conflct with his thrifty father who represents the older order; the equally laidback Francesco (Stefano Satta Flores) who spends his days skirtchasing and dabbling in on-off involvement in local antifascist politics; and the slightly older and deadpan Sergio (Sergio Ferranino). At times remiscent of I Vitelloni in its general flavour – Wertmüller, interestingly, assisted Fellini in 8 ½ – it comprised of fine B/W photography, elegiac voiceover and an idiosyncratic flavour; if morning shows the day, this sure did, even if it felt tad unassuming, incoherent and rough in the edges to be considered a major work.