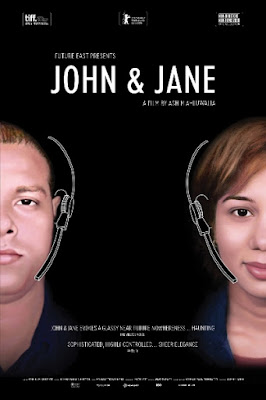 One of India’s most ubiquitous modern-day contributions to world economy – pejoratively speaking, of course – might just be white-collar sweatshops, viz. 24/7 outsourced call centers. There, college-educated, English-speaking youngsters slog for a pittance, and often at the oddest of hours, for jobs that’re far more profitable to relocate from the US to the other side of the globe; and, ironically, they must also impersonate Americans – by taking false names and imbibing fake accents – and display artificial geniality even while facing bad behavior, as part of the standard operating procedure. In his gently observational documentary and debut feature John & Jane – made 6 years before the dazzling B-movie homage Miss Lovely – Ashim Ahluwalia provided a wry and at times captivating peek into this cloistered world driven by efficiency, targets, fakery and relentless salesmanship. The filmmaker weaved his narrative through short vignettes focusing on six young women and men employed in this sector – the cynical, lively “Glenn”; the effervescent, dance-loving “Sydney”; the hyper-optimistic “Osmond” brainwashed by the “American Dream”; the homely “Nicki”; the upbeat “Naomi”; and “Nicholas”, who gets only a brief window with his wife at a deserted McDonald’s over breakfast, due to their contrasting shifts, reminded me of the delightful Bengali film Asha Jaoar Majhe. And their stories were alternated with shots of jam-packed executives making desperate sales pitches to disinterested customers in the US or calming frayed nerves of agitated callers, along with their training on the American way of life that bordered on crass propaganda. Ahluwalia, interestingly, largely avoided judgemental standpoints or pointed tones, which made it a sedate, low-key affair that was affecting if not incisive, while also blurring the lines between straight-up documentation and performative elements.