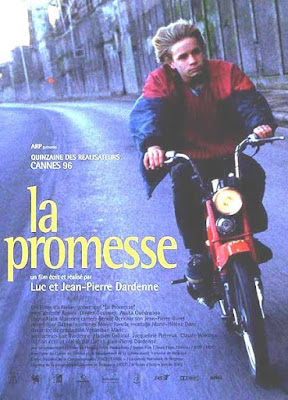 The Dardenne brothers had already made 7 feature-length films earlier, but it was with La Promesse that they didn’t just mark a new beginning and receive smashing international breakthrough, it remains one of their most incredible works too. With this, therefore, the Belgian duo marvelously established – with assured command, immediacy and vitality – their radical humanism, political defiance, aesthetic palette and formal rigour that would define their filmography thenceforth. Set in the outskirts of Liège – the city which, with its industrial and working-class ambience, would become the dominant milieu in their works – it stirringly focused on impoverished illegal immigrants who face exploitation, discrimination and apathy in the hopes of finding better lives for themselves; and, in turn, it provided a peek into the underground trades that profit out it. Roger (Olivier Gourmet), a relentless middle-aged man, is in this business – providing shabby accommodations to undocumented migrants, and fleecing them of money and extracting free labour too. His comrade-in-arms is his gangly teenage son Igor (a then 14-year old Jérémie Renier) who works as an apprentice, but gets pulled in by his demanding father for various chores. His impressionable mind and underlying empathy are tested upon a Burkina Faso man’s accidental death; and when Roger tries to brush it under the carpet by tricking his intensely vulnerable, newly arrived wife Asita (Assita Ouedraogo) and infant son out of his radar, the young boy takes a stance even if that can rupture the fragile bond with his self-serving father. Brilliant performances, exquisite evocation of the grungy surroundings, unequivocal yet understated political commentary, and extraordinary balance between minimalism and emotional undercurrents, made this a quietly devastating work filled with moving moral epiphanies.