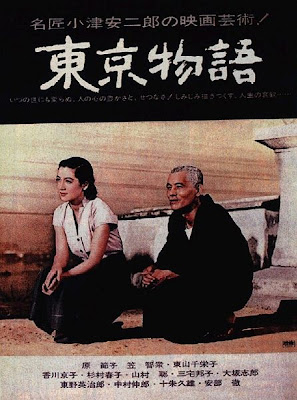 Akira Kurosawa has always been the face for Japanese cinema to the international audience, but when it came to artistic brilliance his compatriot Yasujiro Ozu deserves equal acclaim. Tokyo Story would probably remain Ozu’s greatest and most famous work, as this quietly observant, deeply melancholic, and meditative film has come to be recognized as a landmark in world cinema. The film chronicles a few days in the lives of an aged couple who decide to visit Tokyo in order to spend a few days with their children. Unfortunately, their children have their own lives to lead, and though their displeasure remains subtle for most parts, it’s still palpable to them. The old and lovable couple has a good time at the bustling metropolis, but deep within they feel sorrow that their children have moved away from them from an emotional standpoint. The only person who cares for them during their stay at Tokyo is, ironically, the widowed wife of their dead son, Noriko (Satsuko Hara). The elegiac tone and the inherent sadness in the content have the ability to move anyone, yet the film isn't bleak or depressing. Despite the numerous sorrows that life puts in one’s path, the director didn't turn the two principal protagonists cynical. Consequently the movie’s deeply-felt humanism and its willingness to appreciate the small joys in everyday life – like the serenity that the couple feels by quietly sitting in front of the beach, or the nostalgic throwback that the husband (Chishu Ryu) experiences by joining in for drinks with two of his old friends – made this lovingly paced and beautifully acted film a deeply affecting and emotionally resonating masterpiece.

It's one of the greatest films in the history of the cinema, and with Mizoguchi's SANSHO THE BAILIFF it rates for me among the ten best films of all-time. It's a wrenching humanist parable by it's most celebrated auteur, it contains a luminous performance by Setsuko Hara that will break the hardest of hardest and it speaks volumes on the universality of old age and how paraents are left to pasture. It's a true work of art that will always be seen as one of this form's most sublime moments, a film of lasting and piercing beauty that will persist as long as the world turns.

This is a master class review here.

Thanks a lot Sam. I knew about your deep love for this film, so was waiting to hear from you. Yes, Tokyo Story finds place among nearly every 'Greatest Movies of All-Time' lists, and quite rightly so. The film's simplicity yet its message of humanism, and it lyrical portrayal of the simple joys & sorrows of life, was quite heart-breaking to watch. Thanks again for sharing your enthusiasm for this masterpiece.

You guys used my words...
Many people said that Leo McCarey's Make Way for Tomorrow inspired the creation of this film.Yes,they do share very similar theme,but Tokyo Story is more profound in its way.

I haven't seen Make Way for Tomorrow, but from what I know about it, they do share similar themes. In fact, movies with such themes have been made in India as well. But again, as you mentioned, Tokyo Story was probably far more profound & subtle than any of them. Thanks David.

'Tokyo Story' remains my favorite film, an oceanic pondering of everything that's called life, or, more crudely, the 'passing parade'. It's hard to comment on this masterwork without diminishing it to cliche -- 'Tokyo Story' simply and magnificently exists.

Thanks a lot Mark for sharing your love for this great masterpiece of world cinema. And that's a terrific one-line summation of the film that you've provided though, given the profundity & universality of its theme & subject exploration, even pages might fail to do complete justice to it.

To me, Ozu's warmth is better represented by other films - this feels to me one of his most pessimistic ventures (Tokyo Twilight is also downbeat, but with a more tragic than fatalistic tone, if that makes sense). Though Tokyo Story is probably the "better movie" in terms of all-around filmmaking, I think on a personal level I prefer Make Way for Tomorrow. Late Spring is my favorite Ozu.

I can't say I've explored much of Ozu (and that's something I'm certainly not proud of), but I can appreciate the points you've made regarding his films. As for Tokyo Story, yes, it certainly is a tragic story, yet the way Ozu framed it with all its emotional underpinnings & subtle observations, I did feel a sense of upliftment despite the way the story ends. I could sense his faith for his fellow human beings despite being aware that empathy or fellow-feeling aren't really common traits.