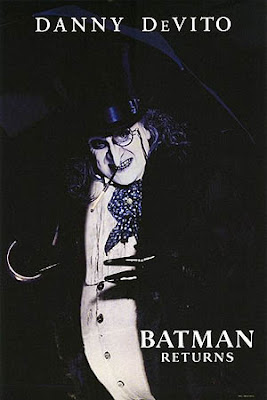 If Batman was dark and violent, with Batman Returns Tim Burton took superhero movies to places hitherto unimaginable. This is a twisted, demented, disturbing, and well, a macabre take on the something that, till then, used to be considered a genre tailor-made for teenagers. Batman isn’t just relegated to play a supporting role here, he’s more of a dull and minor character at best – and that probably remains the film’s biggest flaw. But that apart, it worked astoundingly well at various levels. We have two incredibly sketched and portrayed villainous characters here, with an interesting third thrown in for good measures. On one hand there is the uncouth, grotesque and vengeful, yet quietly melancholic, Penguin Man (powerfully played by Danny De Vito), who was abandoned at birth for his physical deformity – despite the fact that he’s one of the bad guys according to the classical definition of a villain, I found the scene where he dies really moving; and on the other there is the dangerously seductive, unpredictable and mentally damaged Cat Woman (played with striking panache by Michelle Pfeiffer). Michael Keaton returned in the titular role of the Caped Crusader, but he hardly had much to do here with or without the cowl. Though a ‘Good versus Evil’ story on the surface, the line between the two has been so blurred here that it’s nearly indistinguishable. Consequently what we have is a subtly profound commentary on society’s obsessions with outwardly looks, and how the inner self doesn’t really matter if one’s physical appearance doesn’t conform to what the society wants. Brilliantly scored and nicely photographed, this is one superhero film I would never recommend any minor to.

I think Burton’s two Batman films were original in terms of how different they were to the
tongue-in-cheek TV-series from the 1960s. Burton really made Batman into a mysterious character again, Michael Keaton’s understated and vulnerable performances worked for me, but I agree the villains stole the show. I remember I was disappointed Burton only produced “Batman forever”. Chris Nolan owes a lot to Burton.
Batman Returns I felt never got enough credit when it came out, has some flaws, Danny Devito’s stomach looks fake, and the batmobile street scene is poorly executed, still it’s entertaining and darkly atmospheric, so glad to see the high praise. Interesting as you point out that we empathize with the damaged lives of penguin and catwoman. Too often the villains in superhero movies are one-dimensional.

Thanks Chris. Yeah, the two Burton ventures into Batman were indeed wildly original and far removed from the kind of the superhero films most people are accustomed to. They weren't simple 'good v/s evil' tales, as they probed into the inner psyches of the so-called villains and showed how we, the viewers, can sometimes be not so different from them.

Great that you agree that Batman Returns never got its due. Yes, from a technical standpoint there are a few flaws, but they didn't really concern me much because SFX, for me, was a minor aspect as far as this film was concerned. But yes, it would have been better had Burton devoted some more time to Bruce Wayne too.