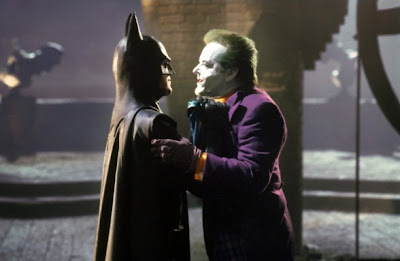 Superhero films had always been known to be simplistic and light-hearted but likable tales of ‘Good versus Evil’. Tim Burton reversed that trend with his pair of forays into the legendary creations of Bob Kane, and provided the template that would be followed thenceforth. Batman, the first of those two films, wasn’t just quirky but also a dark and disturbing take on the vigilante justice doled out by the caped crusader as multi-millionaire Bruce Wayne (Michael Keaton), who loves dressing in the ludicrous Batman suit, has been portrayed here as a weird guy living a dual life who isn’t really much different from his antagonist and arch-nemesis, viz. Joker (Jack Nicholson). Horribly disfigured upon being accidentally thrown in into a vat of industrial chemicals, Joker represents the darkest sides of human nature with his manic outbursts and propensity for massacre and mayhem, yet the two principal characters of the tale essentially represents the two sides of the same coin. Jack Nicholson played the role of the gleefully psychopathic and suitably cartoonish Joker to absolute perfection. Keaton was also decent, though he was rather in a supporting role vis-à-vis his more charismatic enemy. Kim Bassinger played the love interest in the movie. Burton made good use of music, what from a technical standpoint what really stood out were the excellent cinematography as also the terrific creation of the urban jungle of Gotham City that was Blade Runner-esque in its depiction.

Though The Dark Knight has a more compelling screenplay, this film is visually much richer than the Nolan version. What's interesting to me is how times change - in the 00s people were raving about how much "darker" Dark Knight was than Batman, even though in '89 Batman's darkness seemed revolutionary. Mostly it settled around Ledger vs. Nicholson, and Ledger was admittedly edgier than Nicholson, who was playing more of a middle-aged postmodern jokester than a bona fide psychopath.

Exactly! In fact, I'm quite sure that majority of those creating all the hullabaloo about Nolan's Batman films haven't watched the ones made by Burton. While the Nolan ones are quite engaging, they certainly nowhere as dark as the Burton ones - in fact, they're quite mainstream action flicks in comparison. As for the Joker roles, I liked both - but yes, Nocholson's one was admittedly more cartoonish of the two.

Wow, that would be shocking to me though I suppose in the case of some teenagers who were born after the Burton films came out it might be possible.

I'll bet you that a lot of the people HAD seen the Batman movies but not for a while, and remembered the more cartoonish elements without remembering the darkness. Plus the Schumacher films kind of changed people's perceptions of the original franchise.

It also shows how societal perspectives change - in the 80s, darkness and surrealism/fantasy co-existed whereas in the past decade a sort of realism (faux-realism, maybe) is seen as a prerequisite for darkness. This realist fetish is, to my mind, excessive, dispelling a lot of the inherently imaginative appeal entertainment films can hold. Plus, it's "realistic" in the wrong way, latching on to a gloomy style of photography and misguided assumption that a messy mise en scene = realistic, but ignoring more naturalistic touches in performance and pacing. My opinion, anyway...

That's a great point you've made about realism & gloominess being equated darkness in contemporary films.

The Burton Batman films were certainly not realistic - they were overtly cartoonish and tad over-the-top too, yet they'd remain far more dark than the Nolan films would. But yes, Nolan has tried bring Batman, his surroundings & his antagonists a lot closer to actual life - consequently, by that argument, its certainly more realistic.

But, I agree with you, realism & gloominess aren't really synonyms for darkness - in the same way that it's not the other way round as well.

And yes, the 2 Batman films that followed the ones by Burton - they were neither dark nor realistic; in fact they were plain simple awful :)