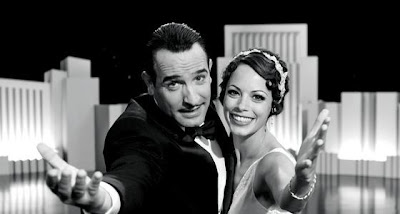 The Artist might appear to some as merely a pastiche of silent American cinema, but in essence it is more than just that – it is an audacious experiment with form and style, an homage to a long-lost era where movies were more “universal”, a commentary on the general lack of staying power of silent screen dramatic works (as opposed to comedic/satirical works by the likes of Chaplin and Keaton which will always be lapped up by viewers), the dramatic upheavals brought on by the unleashing of talkies by Al Jolson’s The Jazz Singer and the need for adaptability and smartness that this transition demanded, and of course, the director’s unabashed display of love for motion pictures in general. Made in the tradition of silent, black-and-white films of the pre-sound era, it chronicles the fall from grace of George Valentin (Jean Dujardin), a silent screen idol, upon the ushering in of sound (a fate that many faced then) – in a last ditch attempt at impressing his fast-receding fans he pumps in his own money into a mega-project which, quite inevitably, sinks at the box-office and takes him down along with it; and the simultaneous rise in stardom of Peppy Miller (Berenice Bejo) who experienced her first ‘two minutes of fame’ courtesy Valentin. Dujardin has provided a memorable turn as the heartthrob whose fortunes experience a dramatic reversal – the character’s natural charm, charisma and suavity get slowly eroded to reveal his inner vulnerability, which he portrayed with élan and incredible ease. With the arrival of sound musicals were bound to follow – this is hinted at by making fine use of Dujardin’s uncanny resemblance with Gene Kelly through a wonderfully choreographed tap-dance sequence before the wickedly ingenious final scene.

I had very low expectations walking in to see this film. I left the theater with a spring in my step and a smile on my face.

Well, to be honest, I too didn't have very high expectations when I went in to watch this movie - and I guess that helped in appreciate it.

And yes, I guess it was a criminal offense on my part not to mention about Uggie (I presume you're referring to the dog), as it sure was a show-stealer :)

Good review, is it just me or are they getting longer lately ( : A charming, entertaining, warm, crowd-pleasing movie for sure. The Artist is not the best picture of the year for me, though I do think Jean D was born to play Goerge Val, and deserves his Oscar.
Clever marketing as you allude to, taking the old and making it new again. A trend perhaps: Unforgiven (92, the western), Chicago (2002, the musical), The Artist (2012, the silent film), who knows about the homage in 2022 ( :

Spoiler: I found the message/ending of the film puzzling and disturbing, and surprised so few are talking about it. Do you agree? , that the message with regard to George Valentine’s career is, conforming=happiness, fame=happiness , popularity= happiness, box office= happiness.
I don’t know, maybe it’s only natural for George Valentine to want to remain in the limelight (and keep working), I don’t envy being a star, George V seems totally addicted to attention. So its about celebrity as well I guess ( :

Haha, that's an interesting trend you've observed regarding Best Picture winners, but one that requires us to wait a decade in order to see if (and what) unfolds next :)

Well, that's a great observations you've made regarding a potent subtext of the film - that of celebrity culture, or more accurately, what a celebrity essentially wants. This might result in gross generalizations, but yes, the intense desire to remain at the forefront of the public's attention does seem to occupy the major portion of the brain of most, if not all, stars. And that does get reflected in George Valentin's intense desire to conform to his public image and persona.

Thanks Chris for sharing your thoughts.

Well, Shubhajit, I find it incredulous that I come to this capsule so late, but you must excuse me for this as I have probably been spending the time I should have been here promoting this masterpiece to everyone who will listen. I've now seen it five times in the theatre, and have fallen in love with the film in every sense. It's numerous awards at the Oscars, BAFTAs, Cesars, New York Film Critics, London Film Critics, Boston Film Critics et al all speak for t6hemselves, and suffice to say that no othewr film in history has pulled off such a dominating feat.

Uggi is wonderful, Dujardin and Bejo are magnificent, Schiffman's cinematography is luminous, and Ludoovic Bource's spectacular score in one of the best in many years.

I can go on and on, but I think you get the point.

Thanks a lot Sam. Yes, I am completely aware of your love for this film. I've already seen you write about this a couple of times at WitD, and your love for it was visible there. I'd gathered that you've seen this film multiple times, but 5 times at the theatre - wow, that's truly a feat in itself!

Yes, this is a wonderfully conceptualized and made film - a terrific homage to a lost era of cinema. And technically it sure is a knock-out. Thanks again Sam for sharing your thoughts here.

Uggy boroi bhalo chhilo... I think I am slightly in love with him, and I think this is the best take on the film "Singing in the Rain" done till date as the film has got so many things taken from it, including the way the Hero looked, his movement and style, and also the heroine in the first scene who was a dead ringer for the one who was the "villain" in Singing in the Rain. Also the introduction of The Great Zigfield at the end was brilliant.

Yeah, Uggie was a show-stealer in the film - what amazing training must have gone behind making it act! And yes, the references to Singin' in the Rain were spot on. Thanks for stopping by.