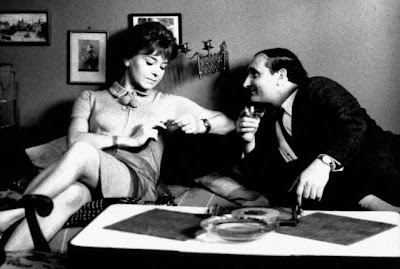 The Joke, adapted from the debut novel of the same name by the famed Czech writer Milan Kundera, and directed by Jaromil Jires, was one of the most politically charged movies to have come out of the Czech New Wave movement. That, combined with its subversive humour and sharp commentary on the then-totalitarian regime, ensured that it was promptly banned by the powers that by. The joke that the movie’s title refers to was an innocuous and a tad cynical statement made by the film’s protagonist, Ludvik, to his frigid and politically-bent fiancé during his college days in the Stalinist-era – and this had resulted in his expulsion both from the Party and university. Now, a couple of decades later, the middle-aged, embittered and even more cynical Ludvik (excellently played by Josef Somr) has returned Prague with the sole intention of exacting revenge on his buddy who had done him in all those years back, by seducing his wife. The narrative of this crisply timed film regularly alternates between the past and the present, thus deftly revealing the changed perspective of the protagonist as well as his inability to disassociate with the events – the betrayal by his girlfriend and his friends, as also his compulsory days in the army and forced labour in the mines, that destroyed his life, filled him with bitterness and disillusionment, and turned him into an isolated person. The allegorical story, filled with pinching wit and a rather bleak point-of-view of life, marvelously portrayed the dehumanizing nature of the Communist society, and how the diktat for optimism and emphasis on the community breaks the spirit of the individual. The director also made absolutely terrific use of music to accentuate the sense of loss, loneliness and sadness.

I've got this one on my soon to be watched list. It sounds like another fantastic gem fromt he Czech New Wave.

Yes, this was yet another member in the pantheon of brilliant Czech New Wave films. Do watch it soon.

Saw this a while back when I was on a Czech New Wave kick. It makes an interesting companion piece to Valerie and Her Week of Wonders, which I think was Jires' next film (or at any rate, came soon after) and is entirely fantastical - as if this was the only route Jires could take following the destruction of the Prague Spring. Amazing they even let him work again following the explicit social criticism of The Joke - probably pulls less punches than any other Czech film I've seen from this era.

Yeah, not only is it surprising that Jires managed to work even after making such a scathing political attack on the establishment, what is more surprising is that the film's prints actually managed to survive the regimen (which was a good thing for all cinephiles, of course). As for Valerie & Her Week, that's one movie I'd like to watch - in fact Czech New Wave is something that deeply interests me too - but haven't managed to yet as I've not managed to lay my hands on it, at least not yet.