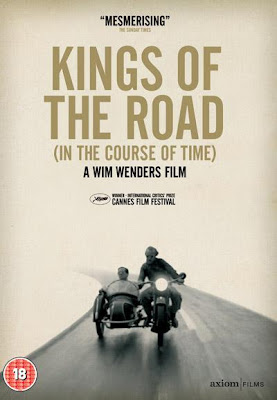 Road movies have been mostly known as a quintessential American sub-genre for geographic as well as popular cultural reasons, but some marvelous road movies have been made elsewhere as well – case in point, the fascinating “Road Movie Trilogy” by Wim Wenders. Kings of the Road was the final chapter of the loosely-plotted existentialist trilogy which also comprised of Alice in the Cities and The Wrong Move. This male ‘buddy movie’ comprised of as its protagonist two men who have become social outsiders either through choice or circumstance – Bruno (Rudiger Vogler), a movie projector repairman who roams around the border between East and West Germany in his van searching for bit-jobs, and Robert (played by German critic Hanns Zischler), a suicidal and a more erudite person who is trying to cope with his decision of leaving his wife. Brilliantly shot in exquisite black-and-whites and boasting of an equally memorable soundtrack comprising of classic pop/rock hits, the film’s tone is meditative and quietly nostalgic, while its theme is one of disillusionment, loneliness and ennui, and the feeble attempts at coming to terms with oneself (and one’s past) as also the need to break through from the state of status quo one is trapped in. The growing kinship between the two contrasting and lonely men has been captured well against their liberating journey through desolate and sparsely populated urban-rural landscapes. The film is also punctuated by Wenders’ observation of and sharp commentary on the then state of the German society, in general, and its film industry, in particular.

This does indeed capture the Wenders qualities that have now come to be seen as an identification point for him. I have come to respect this film more over the years after an unimpressed beginning, much as was the case with PARIS, TEXAS. It's certainly the best of the trilogy and ir's wistfully shot.

You do a fantastic job here Shubhajit!

Thanks a lot Sam. I loved his Alice in the Cities, too, considerably, but Kings of the Road would remain a notch better than the former for me too. I'd liked Paris Texas as well, but perhaps not as much as its reputation - so I guess I need to revisit it sometime.