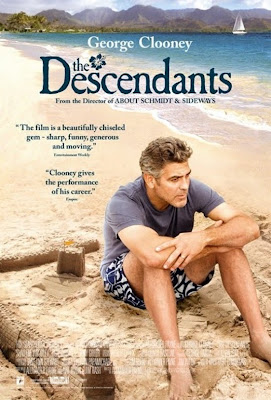 Alexander Payne returned to the director’s chair for a feature film a good seven years after his last film, Sideways, with this one, but the end product is a proof of the fact that he hasn’t really lost any of his touch. The Descendants, which is a movie about one man’s vain attempts at coping with loss, tragedy and infidelity, that, despite its seriocomic tone, is filled with warmth, poignancy and a certain degree of exuberance – and this makes this film quite unique in his filmography since Payne is mostly associated with biting satires. Matt King (George Clooney) is a well-off Hawaiian workaholic who is on the threshold of earning millions by selling a piece of real estate. However, he’s struck by tragedy when his wife becomes comatose after a boat accident, which gets further amplified when he learns that his wife was having an affair behind his back. The fact that he has never spent much time with his two daughters, especially his teenage daughter who has had some issues with addiction, has made his situating that much more delicate and difficult. George Clooney has given a gently affecting and restrained performance as a family man who seems to be at his wit’s end at the sudden turn of events. Payne underscored most of the dramatic moments as a result of which one might feel a tad hoodwinked from the standpoint of the film’s emotional content, and neither did he take us to any great depths so to speak; but he also interjected the film’s rather serious theme with moments of wry humour and subtle jabs at social mores which nicely complemented both the pathos and the few moments of contentedness that the characters experience.

@ JON ... That's certainly just you. I found it to be touching, albeit being conventional.

@Jon: Yes, I understand that this film has divided the audience, and there's a considerable chunk who haven't been impressed by the film. Incidentally I happened to be part of the other chunk in that, though I don't consider this a great film by any stretch of imagination, I found it to be gently touching film. The plot might have been a tad predictable, but that really didn't dampen my viewing in any way.

@Sam Fragoso: Indeed, this is a conventional film alright, but a touching one at that. Thanks Sam.

I certainly agree with Jon - The Decedents is an overrated film. I don't think that George Clooney should win an Oscar for his portrayal.

"despite its seriocomic tone, is filled with warmth, poignancy and a certain degree of exuberance – and this makes this film quite unique in his filmography since Payne is mostly associated with biting satires."

To me, the humor and seriousness didn't mix so well because at times the humor was so broad while the dramatic elements tended more toward the realistic. By the end of the film, I had accustomed myself to its mixed tone a little better but I'm still not sure about many of those Syd (Sid?) scenes.

Yeah, the seriocomic tone didn't appeal to many. I too wouldn't say this is the best film with such a tone that I've watched, but I did like the way Payne portrayed the dramatic scenes and then casually interjected some wry humour into the proceedings, either right in the middle of those moments or by cutting those scenes abruptly before they became too serious for his liking.

He might have managed to achieve greater emotional resonance had he not been so ruthless of the drama part, but he did provide an offbeat perspective on a rather serious subject with the stylistic choices he made here, methinks.