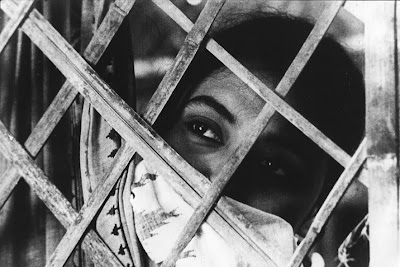 Meghe Dhaka Tara, the first in Ritwik Ghatak’s “Partition Trilogy” which also comprised of Komal Gandhar and Subarnarekha, is considered the greatest masterpiece of the mercurial genius, and remains a seminal achievement in the history of Indian cinema. Ghatak took the otherwise pejorative melodramatic tradition of Indian cinema to stratospheric heights with this heartbreaking examination of the socio-political repercussions of partition, as he did with the other two films belonging to this landmark trilogy of his. The film’s central character is Neeta (a stellar performance by Supriya Chowdhury), the sole breadwinner of her impoverished refugee family. All those around her – her irascible mother, her hedonistic sister, her younger brother, and her spineless fiancé – are classic examples of self-centeredness and opportunism; yet Neeta silently cares for them with all her heart despite the enormous grief she suffers in the process. Only her erudite father and her elder brother Shankar (Anil Chatterjee), who aspires to be a classical singer, reciprocate her love and appreciate her sacrifice; unfortunately, they are either too weak or too preoccupied to really stand up for her. Music, as in all his films, plays a huge role here too in terms of emphasizing its downbeat mood and strangely liberating tone. It in fact boasts of one of the most incredible uses of Tagore’s song where whiplashes are used to stress upon, with devastating effect, Neeta’s inner turmoil and crushing grief. The scene where Neeta finally screams out to Shankar, now an established maestro, that she wants to live (“Dada ami banchte chai”), is not just powerful and debilitating, but transcendental too. The film ends with a darkly ironic depiction of the sad but inherent cyclicity of life.

One of my favourites! Love this movie to bits! Seminal in so many ways and a genuine masterpiece. It's the ending for me - really shakes me up and leaves me emotionally distraught.

Thanks a lot Omar for sharing your love for this Ghatak masterpiece. The first time I'd seen this (which was a very long time back), I wasn't as moved, but upon revisiting it I realised what a powerful film this is.

Yes, this is surely a masterpiece and one of my favorite films out of India in the history of teh cinema. It is one Ghatek film that stands up there with Ray's greatest, and it's one of the most emotionally moving films I've ever seen. Your discussion of the character's self-centered traits and oportunism is dead-on and authoritatively-posed as is the posing of the power of Tagore's song and the cycle of life.

This is truly an unforgettable film, and you have done it full justice here.

Thanks a lot Sam. Meghe Dhaka Tara does stand as one of the greatest Indian films ever made, and yes it does also stand up with Ray's best works. Ghatak could do wonders despite sticking to the melodramatic tradition of classical Indian movies; further, the memories of partition forever influenced his works. The film has so many subtexts that one really needs an elaborate critique to do any semblance of justice to it.