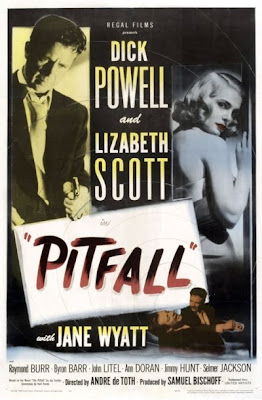 The phrase ‘American Dream’ has historically symbolized hope for better times; yet, dreams can be dark, crippling and shallow, too, and this in essence formed the core theme of this excellent albeit underrated and largely unrecognized film noir. Like most archetypal noirs, the movie shows the slow but sure disintegration of a model happy family owing to a casual mistake (if I’m allowed to use that word) committed by the head of the family. John Forbes (Dick Powell) leads a seemingly contended life – he’s a well-to-do insurance man, has a beautiful wife and a cute little son. But, from his very first appearance it becomes clear that he’s not really satisfied with his routine existence, and as a logical consequence to his sense of ennui and dissatisfaction with his status quo, he ends up having an affair with a client of his – a classic damsel-in-distress (Lizabeth Scott). In a world as dark and doomed as in noirs, adultery is inevitably followed with blackmail and murder, and Forbes’ life to ends up following that downward spiraling path. Powell gave a startling turn as a man who, like classic noir anti-heroes, who strays despite having everything to lose – he perfectly managed to make his character both utterly believable and subtly tragic through his composed performance. The supporting turns, too, were noteworthy, especially that of Raymond Burr as a seedy and psychotic private eye with an imposing physical presence. This moody and compelling film painted a truly desolate and distressing picture of life, the ephemeral nature of happiness and how everything one cherishes can fall apart so easily courtesy just one inadvertent indiscretion.

PITFALL works in large measure because the three lead performances come close to being career bests. Dick Powell works as the cynical workingman. Lizabeth Scott was never better as the unlucky dame. Raymond Burr is at his menacing best. This is storytelling so strong and so well-acted that it precludes any notion of dating. It is de Toth's best film for sure, though HOUSE OF WAX and CRIME WAVE are notable achievements. This is one noir undistinguished by it's visual style, but utterly compelling by it's deft execution and engrossing narrative. As such it is well-deserving of it's high regard in this splendid capsule assessment.

Thanks a lot Sam. Indeed, this is one of those rare memorable noirs which do not boast of extraordinary cinematography or camera work. It works because of its theme of an average family-man doing something that an average family-man isn't expected to do, along with the performances and excellent storytelling. This sure remains as Dick Powell's best work along with Murder My Lovely.