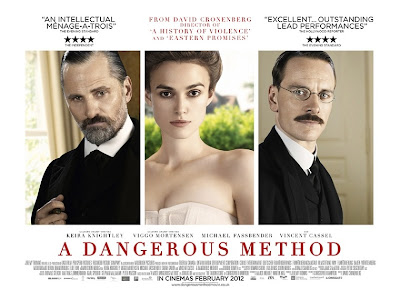 David Cronenberg has travelled a long way over the course of his eventful career – from shocking body horror and grotesque sexual imagery to the movies he’s been making in the last few years, which, in comparison, appear almost mainstream on account of their restraint and understated natures. A Dangerous Method, in which he’s chronicled the complex and deteriorating relationship between two legendary figures of 20th century – Sigmund Freud (Viggo Mortensen), father of psychoanalysis, and Carl Jung (Michael Fassbender), father of analytical psychology and a disciple of the former during his earlier days. To complicate matters further, the presence of the Russian-Jewish lady Sabrina Spielrein (Keira Knightley), initially a patient of Jung but later goes on to become a psychoanalyst herself, creates an uneasy and turbulent psychological triangle of sorts between them. The film is extremely verbose in nature thus necessitating undivided attention from the viewers; further most sequences that had dramatic potential have been deliberately underplayed in order to ensure that its darker themes remain well below the surface during the better parts of its length – these two facets have made this quite a different experience for Cronenberg aficionados. The fact that mental degeneration and sexual deviation formed two core themes of this film would perhaps be the sole redeeming qualities for those who still equate the Canadian filmmaker with his earlier works. These apart, the simmering tension and dynamics between the two scientific giants have been very well captured, thanks in large parts to the exceptionally assured and quietly powerful turns by Mortensen and Fassbender, the matured and cerebral treatment, and the layered script.

What a coincidence, I watched the movie yesterday night. You had written exactly what I analyzed in the movie. It is amazing to see such artistry to create a movie on such a complex matter of psychology. Knightley, Mortensen and Fassbender are such a treat to watch. The complexity of the movie will make the viewing difficult but surely hard core cinephiles will be pleased. With Freud in my mind, I am planning to watch Turin Horse now. But don't you fill it was too short in time duration...

Thanks a lot Yayaver. Yes, this isn't an easy film as one needs to be aware of a number of aspects in order to fully appreciate its various nuances. And yes, the acting was quite good too. Turing Horse is a stunning masterpiece - I'd be interested to know your views on it once you've watched it.

I'm very much looking forward to this; especially seeing Keira Knightley again, who I've recently come to admire after seeing her in Never Let Me Go. She blew me in that film, to be quite honest, and she... how can I say this?... has a really interesting face :)

Yeah, Keira Knightley has evolved over the years into quite a good actress. And, to top that, her movie choices have been such that her career, too, is worth following. And yes, her face is "really interesting" too :)

Keira Knightley's performance I didn't think was as bad as some people are saying, I'm a little surprised she didn't get nominated for supporting actress during award season. The boat trip to the US was disappointing, as that plot point didn't go anywhere.

The main thing I got out of the film was how the doctor’s own feelings got in the way a little bit in psychoanalysis when treating a patient. They hadn’t learnt to distance themselves. Did seem to capture the costumes and setting well(without much knowledge of the era on my part)
I agree with 3.5 out of 5,but I think it's a film that perhaps may grow on people in time.

Yes, Keira Knightley certainly wasn't bad by any yardstick, but I felt she got completely overshadowed by the quietly powerful turns by Mortensen & Fassbender. Though I'd found her turn in the initial few scenes as a bit discomfiting owing to the ludicrous facial ticks, but after that she did manage to provide a reasonably decent performance.

Thanks Chris for stopping by.