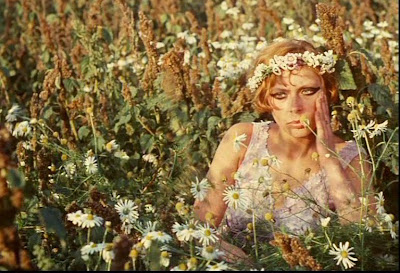 Czech New Wave is mostly renowned for the numerous utterly delectable fables and brilliantly satirical sociopolitical commentaries it has gifted us with. The much acclaimed yet largely obscure avant-garde comedy, Daisies, provided an entirely different perspective to the movement. This vibrant, gleefully experimental, and surrealist film was a daring exercise in Dadaism, and as a result most people would not find the humour and underlying message of this ‘nonsense film’ accessible – it might leave one cold or even alienated as it’s certainly not an easy film to watch or appreciate. No wonder, like so many films belonging to that subversive movement, it was banned by the establishment, while its director, Vera Chytilova, was forbidden to work for the next 8 years. On the surface it might seem that the director is having delirious fun at the expense of her actors and her audience. The two irreverent young women protagonists indulge in a series of largely unrelated activities like dating older men and then leaving them for cold, going for picnic, having fun in their home, or indulging in a grand feast; and the director presented their antics through audacious experimentations with everything ranging from fractured narrative progression to psychedelic montages to jawdropping special-effects for its time (and budget, too). But, for all its nonsense exterior and disorienting imagery, it was a scathing attack against order, control, discipline and regimentation. Its rebellious protagonists and freewheeling spirit were essentially an allegorical but brazen denunciation by the director of the then regressive regimen behind the Iron Curtain and its thought police.

Love this film Shubhajit. I saw it years ago at Northwestern University's cinema during a retrospective on Eastern Euro New Waves. Totally blew my mind. I can't wait to see the new Criterion that is coming out soon. Fine review here sir.

Thanks a lot Jon. What an audacious work this remains even today - both from a technical standpoint & its content-wise. By the way, were you a student of Northwestern University? If yes, what did you study there? Sorry for my inquisitiveness.

Yes, an excellent movie, and a nice capsule. This is one of my favorites - I think I've covered it (in various forms, via clips, capsules, images, full review) more than any other on my own site. Chytilova claimed publicly that she condemned her protagonists and while to a certain extent, this is obviously a red herring to throw off the censors (unsuccessfully) there does seem to be some ambivalence in her portrayal of their rather decadent rebellion. Only makes the film more interesting. Yes, all in all, it's a

Thanks Joel. Yeah, the film has its share of red-herrings. I think the final words of Chytilova perfectly summed up a strong theme of the film for me - that while people chastise others for simple acts like trampling on their sense of morality, they blissfully ignore so many calamitous & regressive actions of the state - acts which deserve all their ire, instead of the former one. Yes, you've mentioned about your love for this Czech New Wave classic, and am glad that you posted your views about it here too.

Haha! Yeah no I just lived very close to campus for about 3 years while I worked nearby and enjoyed the cultural aspects, such as awesome movies to watch!

Jon, I sure can appreciate what a fun & enriching experience that would have been!!! :)