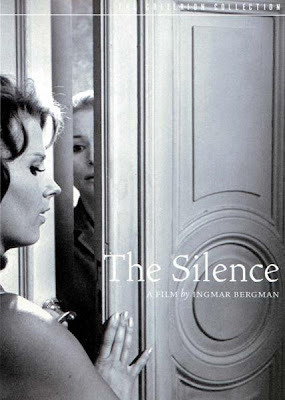 The third and final chapter in Bergman’s thematically-linked “Faith Trilogy”, The Silence would probably rank among the most tonally complex, bizarre and controversial of the lot. Consequently, unlike Through a Glass Darkly and White Light, its inclusion into the trilogy, too, is exceedingly difficult to comprehend. Suffused with emotional starkness, grotesque symbolism, sexual repression, surrealism and discomfiting sensuality, the movie chronicles the complicated relationship between two sisters – the voluptuous and promiscuous Anna (Gunnel Lindblom), and her intellectual, repressed and ailing elder sister Ester (Ingrid Thulin). The two sisters, along with Anna’s kid son, make a stopover in a foreign country, and put up in palatial but largely empty hotel. While Ester is strongly attracted to Anna, the latter has the years come to be repulsed by her elder sister, and this strange chemistry gives rise to strong undercurrents between the two; meanwhile Anna’s son drifts aimlessly in the vast emptiness of the hotel, largely unaware of the psychological tug-of-war between the two ladies. The acting, as in all Bergman films, is great, with Thulin’s being especially nuanced and memorable. Though bereft of background score, the terrific black-and-white cinematography has played an immensely vital role in delineating the various tapestries of this provocative mood-piece.

Shubhajit this is one of my favorite Bergman films. The Silence is such an important transitional piece it that it presages his more oblique, experimental, surreal films that would follow- Persona, Shame, Hour of the Wolf, The Passion of Anna. It is in my opinion about the dichotomy of "Passion" and "Purity" and the question of whether in the end they are any different. Both sisters are psychologically messed up, they just put forward a different front. This one is sexually explicit and filled with symbolism and surrealism as you've mentioned. I love it. It's one I could watch several times and get something new each time.

Thanks a lot Jonny for your terrific response. In fact I too felt that the film contained within it seeds of films like Persona, & even Cries & Whispers. Complex relationship between sisters & repression are themes that must have haunted Bergman. With each film of Bergman that I watch I feel there's still so much of Bergman's vaunted oeuvre left for me to explore.

In the past two decades THE SILENCE has achieved a prominant reputation in the Bergman catalogue to the extent that some are referring to it as their favorite film by the great master, or at least the finest of the Faith Trilogy. As a penetrating and austere study of loneliness, love and sexual obsession it is peerless, and the minimalist set affors the film some quiet but potent urgency. The film has little dialogue, and the conflict between the two women is presented almost entirely in visual terms and through a sound track made up of incomprehensible words and sounds (like the tank rumbling past the hotel) The most memorable scenes include the one with the young boy wondering around the strange place he finds himself in. Superlative acting and lensing by Sven Nykvist.

Thanks Sam. It is a movie that I feel was the most complex and challenging of the three films belonging to his revered Faith Trilogy. The use of grotesque imagery (especially the ultra-closeups and the scene with the dwarfs) and surrealism added layers to the film. Yes, its a debate as to which of the three was the best film of the trilogy. But comparisons aside, Silence remains a very compelling and disturbing piece of filmmaking.