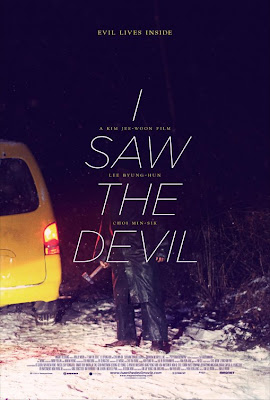 The Koreans sure know how to make a darn good revenge movie. Kim Jee-Woon, who along with the likes of Park Chan-Wook and Bong Joon-Ho, ranks as one of the most sought after filmmakers working in the country today, has made another interesting entry to that club. The film begins memorably with a petite and vulnerable young lady being brutally murdered by a mysterious vicious-looking drifter (Choi Min-Sik). The girl’s fiancé (Lee Nyung-Hun), who’s a highly skilled special agent, vows to avenge for the murder, and thus ensues a fascinating game of punches and counter-punches between the two blood-thirsty men and a wildly topsy-turvy ride through hell. With each passing moment the movie becomes more and more violent and crazy like the continually upping of the tempo of an orchestra, so much so that it was severely censored for its extreme violence and shocking climax; suffice it to say, the film is not meant for the chicken-hearted. In fact, by the time the movie ends it becomes nearly impossible to differentiate between the “good guy” and the “bad guy”, and therein lies the success of any good revenge thriller. The film boasts of memorable performances by the two men – Choi’s turn as the deliriously vile psychopath was absolutely stupendous, and formed the perfect complement to Lee’s laconic and seemingly placid cop. Interestingly both these actors had already been part of superb vengeance flicks – Oldboy and A Bittersweet Life, respectively.

I hated the content for its psycho nature and bloody scenes. Yes, the film was brilliant as a thriller due to really tight script. As you remarked that Choi’s turn as vile psychopath was breathtaking, the movie was too red rather dark for me.Yet, a movie not to miss. Thanks for such crispy review.

Long time no see. Thanks. Yeah, it sure was "red" all the way, as you aptly noted, but I felt it was more than that. And the great atmospherics added to the movie, both tonally and thematically. I understand this isn't everyone's cup of tea, and barring a few exceptions like this one, not mine either.

I Saw the Devil, which is a wonderfully bloody, but stylized, revenge film. This is a film that warps the idea of a cat-and-mouse thriller and benefits heavily based on the way this film handles familiar aspects of this sub-genre. The film presents a few different positions on the condition of psychopaths and is certainly violent, but beautifully made in a very bleak sort of way.

Thanks. You've perfectly captured the movie's essence and why it is worth watching despite its violent content.

Hi Shubhajit, I am piled under bundles of assignments , quizzes and various subjects of yumbeea!

And, I am not getting much time to watch movie. But lately watched Incendies (2010); Beautiful french film...watch it if you also get time. best of luck for your stay in IIM Shillong

Thanks a lot buddy. You too on-board the B-School bandwagon?

I have taken Rural management course in XIMB. Hence, a bit of development and a bit of management education... Just enjoying life :)