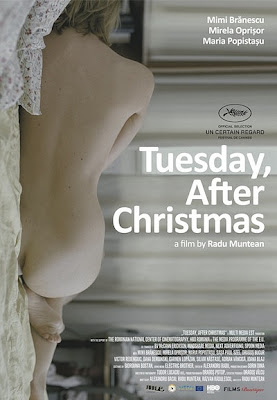 The Romanian New Wave, known for naturalistic depictions of life in the country, has given us some truly memorable gems in the last few years. Tuesday, After Christmas, though not of the same caliber as say 4 Months, 3 Weeks and 2 Days, 12:08 East of Bucharest, California Dreamin’, Tales from the Golden Age, etc., is nonetheless another feather in the country’s cap. A tale on adultery and the aftermaths of its revelation, the film is about a middle-aged married man with a doting daughter, who has fallen in love with a pretty and much younger lady. Despite the seemingly lurid theme, the events and the characters are portrayed as utterly and unspectacularly quotidian, as a consequence of which the dynamics and the interactions are both intensely believable and subtly disquieting. The fact that the revelation takes place around the time of Christmas – an occasion otherwise marked by celebration, happiness and familial bonding, has made this movie quietly resonating, heartbreaking and powerful as well. Minimalistic and intensely realistic in nature, the film is largely bereft of any background scores or quotable dialogues, has made great use of gripping long takes, and is filled with exceedingly naturalistic performances.

I haven't heard of this one yet so thanks for writing about it! THE DEATH OF MR. LAZARESCU made my top ten a few years ago, and 4 MONTHS was almost my film of the year. I enjoy the verite style of the Romanian New Wave and need to check this out. Have you seen POLICE, ADJECTIVE? It was never released on dvd in the US so I may have to import.

The pleasure was mine. Though not many Romanian movies get made, and to make matters even more tough its hard to get hold of them, most of the movies from the country that I've seen in the recent past I've really liked. Death of Mr. Lazarescu was certainly a fine movie. I've seen Police, Adjective, and liked it too.

This film played at Manhattan's Film Forum for two weeks, but I was unable to manage it because of other screenings. I am most interested in the Romanian New Wave, and was a huge fan of 4 MONTHS, so I'll have to play catch up with this film, and another called AURORA. I am not at all surprised that it's another minimalist work, and that in the end it's heartbreaking and powerful.

Romanian New Wave has given us some of the most remarkable movies of the last decade, and I'm really glad to know that you too are fond of it. Do check out Tales from the Golden Age if you haven't already - its one of the best omnibus films that I've seen, and its vitriolic humour is in line with the likes of 12:08 East of Bucharest, California Dreamin', and even The Death of Mr. Lazarescu.