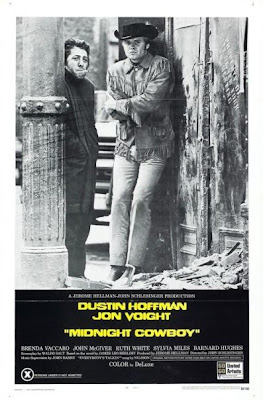 Midnight Cowboy, British filmmaker John Schlesinger’s first foray across the Atlantic Ocean, remains a cornerstone in American cinema. It became a part of the country’s collective conscience and the voice of a generation for its brilliant portrayal of angst, lost hopes. loneliness, decadence and urban alienation. Joe Buck (John Voigt), a naïve Texan with dreams in his eyes, arrives at New York to earn easy bucks as a gigolo. It doesn’t take long for his dreams to vaporize, but he ends up getting an endearing friend in Rico “Ratso” Rizzo (Dustin Hoffman), a chain-smoking fellow-hustler afflicted with tuberculosis, whose American Dreams had been shattered long back. Their squalid and desperate existences form a fascinating counterpoint to the razzle-dazzle and lure of the Big Apple, the metropolis where all the two drifters strive for is to survive another day. Yet, for all its then-controversial depiction of drugs and sex, the film has a deep sense of pain and poignancy at its core, beautifully brought forth through the unforgettable friendship of the two outsiders. Dustin Hoffman, who had kick-started his career with The Graduate, gave a breathtaking performance as the tragic modern-day Tramp. The then-unknown John Voigt too shined as the film’s placid anti-hero. The excellent script and freewheeling structure, combined with arresting camerawork and sounds, added to the movie’s elevation into the pantheon of great films on friendship and bohemianism.

Shubhajit- One of the great iconic films of the 60's and one which I think holds up much better today than something like Easy Rider that seems very much a time capsule type film. I really like the portrayals by the leads and this is probably my favorite Hoffman performance.

Absolutely Jonny, this is one those films for which the word 'iconic' can freely be used. Its theme of friendship and urban alienation are universal, and hence, as you aptly pointed out, make this film relevant even today. As for Easy Rider, yes it does seem somewhat of a time capsule, but its theme of liberation and freedom, and rebellion against forces of conservatism, too were universal, and so I feel that makes it too relevant today. Okay, maybe the forces might have changed with changing times, but what the movie stood for, in my opinion, is very much valid & identifiable even in today's context. As I said, that's just my opinion.

I remember Midnight Cowboy was a bold choice for best picture that year at the Oscars, due to the R rating

I found it bizarre and interesting that The Graduate and Midnight Cowboy both have end scenes in a bus with Dustin Hoffman, just vastly different outcomes! Both are great films.

Well said. Now that you mentioned, I too am thinking that was indeed is a bizarre coincidence. It was really amazing how Dustin Hoffman portrayed two such diametrically opposite characters so early in his career.

I saw this film as a teenager in 1969 at a 42nd Street Theatre at a time, when the culture was changing. The film was rated "X," but I still was granted admittance. It does indeed hold up, and it's a film that changed so much, and dictated a trend. Voight's performance is the best in the film (and of that year in fact) but Hoffmann is superlative, as is Sylvia Miles who had that unforgettable line about the Statue of Liberty taking a leak.

Great essay as usual, and yes, it's a famed study of friendship which yields some remarkable emotional power. That of course is it's main appeal.

Thanks a lot Sam. Yes, I too had read that when the movie was released it was rated "X", but later it was revised to "R". It must have been an incredible occasion when it won the Best Picture Award despite its prohibitive rating by the then-Censor Board. The film really had some stunning performances, and it was really great watching the film - as was discussed earlier in the comments section, despite its being based during a particular time-frame, it doesn't fail to move one even today.

Haha tragic modern day Tramp is exactly how we would have described him if we had an iota of your wit and control of language.Hoffman's role here is iconic and moving.It established him as not just an actor,but one who can breathe through any part given to him.Any trace of his role in graduate is blown to bits here and you simply care for the character even though he wasn't such a stand up guy.In fact he was downright sleazy and tramp-like as you said.

Thanks a lot. As always, you're being too modest, as your capsulte reviews are terrific to say the least. Though I'd place Hoffman below Nicholson & De Niro in terms of sheer ability and performances during that terrific phase in American cinema (late-60's, 70's & early 80's), but I too have loved some of his works. He sure gave one of his best turns in this iconic film.