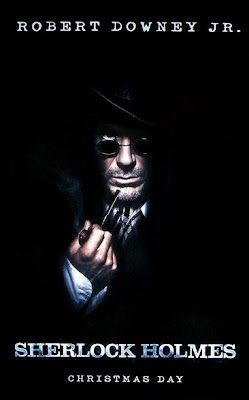 Arthur Conan Doyle’s Sherlock Holmes continues to remain one of the most enduring literary creations and perhaps the single most famous sleuth ever created in the world of literature. The legendary resident of 221B Baker Street has been adapted to cinema and TV numerous times, but never has he received such a wacky image makeover as in Guy Ritchie’s Sherlock Holmes. Here, not only does Holmes have superior intellectual and deductive abilities, he is also a martial arts expert, and he requires all his faculties at full force to combat his antagonist. Robert Downey Jr., who seems to be “in the zone” so to speak, has given a sterling performance as the arrogant, cynical and brilliant Holmes, while Jude Law is decent enough as Dr. Watson. The film’s art-direction is excellent, especially in its recreation of Victorian-era London. Though it has a serpentine plot and delivers a number of twists on its way, it essentially remains a quintessential illustration of “style over substance”; at the end of the day, though immensely entertaining and darkly funny, the same can not be said about its impact or lasting value.

I couldn't even finish Sherlock Holmes (2009), not at all what I was expecting-in the worst sense. I guess they were trying to reach a young audience with the martial arts and stuff, I prefer the good old Sherlock ( :

Ha ha, I sure get your point. I too have always been a big fan of Sherlock Holmes ever since I read all his stories in school. But I liked the deconstruction of Doyle's Holmes, though still retaining the detective's basic essence.

"Style over substance" indeed Shubhajit! I am no fan of this film remotely, and not even Downey could save this messy display of pyrotechnics and enveloping tedium. I also love Sir Authur Conan Doyle's great novels and remain a devout fan of the Basil Rathbone/Nigel Bruce series from the 40's with my favorite film, "The Scarlet Claw." But I can't watch any of the entries from that lot at any time.

Glad that we all agree here! Nice capsule as always!

Thanks Sam. Yes, "style over substance" defined this film for me. But I guess that's true for most of Guy Ritchie's movies. Perhaps that's the way he intends his films to be.

" Nice capsule as always"?
With JOHHNY DEPP?
And KATE CAPSHAW is doing her " SCENE" of a
" LIFETIME"!
Since 2009...lots of " fuck -ups".
NICE- CANNES...& " SNOW PENNY"!
DASSAULT is the DEN for NEVADA EXPLOSIVES.
And UTAH speaks , now, of their PT BOATS!
That DASSAULT and CARON LEASE?
And now KEN STRAWBRIDGE got his " NIGHTMARE" on " ELM STREET"!
And that's with UK- RUSH- and ED.

This is some fun from Guy Ritchie that gets even better with that perfect chemistry from Jude Law and Robert Downey Jr. Good Review Man!

Yeah, the chemistry between Robert Downey Jr & Jude Law was great. Thanks!