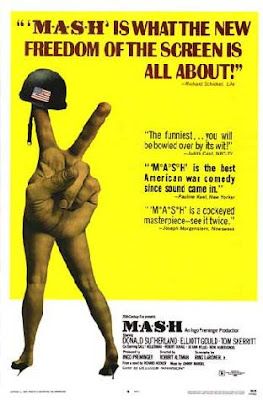 Vietnam War was a watershed event for all of America, and rarely has something as serious as that was made to look so utterly farcical as in Joseph Heller’s brilliant book Catch-22. M*A*S*H, the pointed satire that catapulted Robert Altman to the highest echelons of critical acclaim and popularity, could perhaps be qualified as the cinematic counterpart of the groundbreaking novel. Controversial, anti-establishmentarian and unapologetically in-your-face, this superb black comedy gleefully mocked at the utter ludicrosity of not just the Vietnam War but all wars in general. The irreverent and iconoclastic movie chronicles the acts of blasphemous defiance by the doctors and nurses of a Mobile Army Surgical Hospital during the Korean War, led by the brazenly rebellious duo of Hawkeye Pierce (Donald Sutherland) and Trapper John McIntyre (Elliott Gould). The film is filled with loads of jokes and innuendoes that might seem crass, offensive, politically incorrect and sexist to many; but to think of it, the total dismissal of anything to do with morality, religion, bureaucracy and authority with such impudence and nonchalance was perhaps Altman’s intent to begin with – and in turn one of the principal reasons for its seamless entry into the collective consciousness of its age. And, at the end of the day, all the socio-political ramifications aside, the movie sure was hilarious. Each of the series of eccentric characters were incredibly sketched and superbly performed by the ensemble cast, with improvisation playing a key role in the film’s success.

"Controversial, anti-establishmentarian and unapologetically in-your-face, this superb black comedy gleefully mocked at the utter ludicrosity of not just the Vietnam War but all wars in general."

Indeed Shubhajit. It's was a landmark in this sense, as well as the film that rocketed Robert Altman to lasting fame. It is often mentioned by many as their 'favorite Altman' and it helped to launch one of the most popular American sit-com comedies of all time, one that continues to prosper in re-runs to this very day. The film was even nominated for the Best Picture Oscar in 1970.

Thanks a lot Sam. Yeah, given that this was the film that literally introduced Altman's talent as a filmmaker to the world, I'm not surprised to know that many have mentioned MASH as their 'favourite Altman'. I've read good things about the sit-com too, and would sure love to watch it as and when I get my hands on it.

I have literally rented this movie four or five times over the past two years and have never watched it. I have a block when it comes to Robert Altman movies. Although I've never seen a comedy of his.

Thanks Blake. I know its easier said than done when it comes to a mental block, but I'd still say, rent it once more & just start watching :)