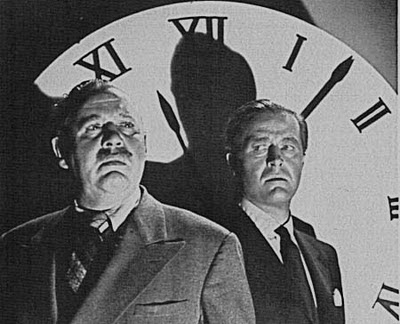 A number of makers of film noirs had a special fascination with the journalism industry it seems. However, though in The Big Clock, the protagonist works for a media corporation owned by the film’s scheming and megalomaniac antagonist, unlike Ace in the Hole or Sweet Smell of Success, its focus was not to provide a searing critique of the industry; rather, what the movie remains in essence is a superb and ingenious thriller. The film boasts of a labyrinthine plot that would require pages to fully describe, so suffice it to say, it’s about a guy who ends up leading a murder investigation with the irony being that the guy who’s been narrowed down as the prime suspect is he himself. He therefore doesn’t just need to conduct a parallel investigation of his own to find the real criminal, but also must stay one step ahead of those part of the investigation team. The brilliant script filled the deliriously convoluted cat-and-mouse storyline with great suspense buildup coupled with exemplary pacing, thus providing us with a nail-biting, thrill-a-minute ride. Ray Milland was excellent as a good man caught in a hellish situation, but the show-stealer performance was given by Charles Laughton – his turn as the tyrannical and power-wielding media mogul with a bizarre fascination for watches, was tour de force stuff to say the least.

I haven't seen this one is some time, but I do recall loving Laughton's performance. He's so watchable in nearly everything he did. I thought he was brilliant in Rembrandt and The Private Life of Henry VIII and he's so good in this one too.

Yeah, that's one performance one is sure not to forget anytime soon. And, to add on to what you mentioned about Laughton, I read an article couple of days back where the author opined that he played more kinds of characters than any American actor ever has.

Funny you mention Laughton here as a scene-stealer, because I actually observed him doing teh very same thing earlier today at a big-screen showing of de Mille's THE SIGN OF THE CROSS, where he played the decadent Emperor Nero. But yes, he does teh same in THE BIG CLOCK, and you've done a marvelous (labyrinthine plot) job in assessing the reasonably solid noir. The suspense is indeed compelling, and there's a strong script.

Thanks a lot Sam. It certainly was a pleasure watching Laughton perform as he did so much of his acting in this movie through his body language. I really loved the way the suspense in the plot was slowly built up as the movie progressed.