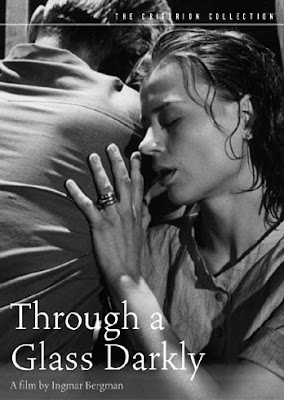 Through a Glass Darkly was Ingmar Bergman’s first entry to what would come to be known as “Trilogy of Faith” or “Chamber Dramas”. This profoundly complex human drama is a deeply philosophical work filled with themes ranging from religious ambivalence to familial dysfunction to sexual awakening to clinical illness. The film comprises of just four characters – Karin (Harriet Andersson), a disturbed young lady who’s suffering from slow mental disintegration; her father David (Gunnar Bjornstrand), a famous writer who is studying her daughter with cold detachment; Martin (Max Von Sydow), her loving husband and a compassionate doctor; and, Minus, her emotionally fragile brother having difficulty in coming to terms with his adolescence. Shot in gorgeous black-and-white, largely bereft of music, and set in a single location – that of an isolated island, this is a searing yet poetically beautiful examination of human alienation and isolation (both emotional and spiritual), and the inherent godlessness of our universe. The film, in keeping with Bergman’s fascination with the dark recesses of the human mind, is filled with disturbing elements and subtexts (most notably Karin's complicated relation with Minus), all brought forth through immensely layered storytelling. Great turns by the cast, especially Harriet Andersson, made the film all the more absorbing.

This is one of my all-time favorite films. Although it rivals Fanny and Alexander for my favorite Bergman film.

Thanks Blake. Of the 8 Bergman movies that I've watched so far, this would rank right after Wild Strawberries, Scenes from a Marriage, and Cries & Whispers. Fanny & Alexander, Persona, and Winter Lights would follow it (in that order). Unfortunately, his iconic The Seventh Seal would take the 8th spot.

Shubhajit, Bergman's my favorite director and his "Faith Trilogy" is quite fascinating for the intense drama and the search for God or lack thereof. Sven Nykvist, maybe the best black and white cinematographer of all time, filmed this one. The island was Faro, where Bergman lived and filmed several of his classics. Yes and Harriet Andersson is great. Looks like you've seen Winter Light, which is the second of the trilogy. The Silence is a deeply symbolic and transitional film for Bergman and is a must see to complete the trilogy as well.

Thanks a lot Jonny for stopping by and sharing your love for Bergman's cinema. Yes, I've seen Winter Light, and I'm planning to watch the final chapter in the trilogy, viz. Silence in a day or two.

I agree, Sven Nykvist would rank among the best cinematographers of all time, if not the best ever.

By the way, given Bergman's fascination with religion, and the futile attempts that his characters make in searching for god/spirituality in a number of his films, I wonder if Bergman himself was a believer or an atheist.

Shubhajit, you bring up a great question. It's well known that Bergman's father was a Lutheran minister, but it appears that Bergman's experiences with him were quite troubled, as is apparent from multiple films, especially Fanny and Alexander. He himself said that he did believe but lost his faith at a young age. It seems like he was still searching for God and could not completely let go of the question though.

You're right about Sven Nykvist and I may have underrated his value. Black or White or Color, he's right there with the best cinematographers, and might be the best of all. Looking forward to your thoughts on the films to come.

Thanks again Jonny. Yes, Bergman's crisis with faith, religion and god could very well be the subject of a full book and/or movie. In fact I'm not sure if it already has been attempted; if not, someone surely should.

As I said, it would be difficult to name 1 person as the greatest cinematographer of all time. But Sven Nykvist sure ranks among the best cinematpgraphers of all time.

Shubhajit: You have penned an extraordinary capsule here, and one that's incredibly topical at this time, after I just last week watched a stage adaptation of this film, that featured revered British actress Carey Mulligan as Karen. The use of the close-up, dissolves and film shading could never be replicated on the stage, and as a result even with Mulligan and others in top form, the film far better conveys mental deterioration and emotional turmoil. I always go back and forth with this one and WINTER LIGHT as the best in this trilogy, though THE SILENCE has gained with me in recent years as well. Point is this Faith Trilogy hasn't a weak link, and the intricacy is heralded in with this arresting opening salvo. With Bergamn, it's one masterpieces after another, and it's always tough to come up with any definitive listing, especially since the day after you make it you may change your mind.

Thanks a ton Sam for the appreciation.

Yes, I remember having read about your experience with the theatre-adaptation of the film. I know it would have been impossible to recreate the moodiness of the film on stage, still I would have loved to see it as well.

I completely agree with your point of view about Bergman's filmography. He sure made one gem after another. As for this trilogy, I've watched Winter Light as well, though I would (as of now) place it below in pedestal vis-a-vis this one. I'm tentatively planning to watch Silence tomorrow.