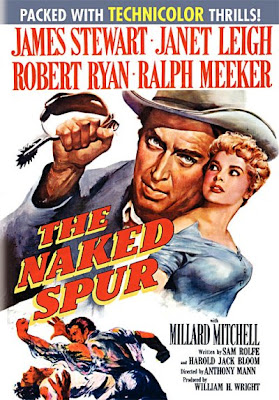 James Stewart starred in a number of Anthony Mann films, and The Naked Star is usually considered the their best collaboration. One of the early examples of revisionist Westerns, it is far removed from the good guy-bad guy story-lines typified by Classic Westerns. Stewart here plays Howard Kemp, bounty-hunter who isn’t just laconic but also prefers to be a lone wolf. He is forced to enlist the assistance of an old brusque prospector and a young dishonourably discharged soldier, in order to catch hold of Ben (excellently played by Robert Ryan), a notorious and maniacal fugitive, take him to the concerned authority, and collect the ransom that has been declared by the state. None of the characters in the film is flawless, consequently the journey of the group is made as much perilous by the harsh, arid landscape they must travel to, but also the intense psychological rivalry between the trio (on account of their inherent lack of trust towards each other) – the psychotic captive makes full use of the latter by continually supplying more and more fuel into the fire. Meanwhile, also tagging along with them is a hotheaded beaut (Janet Leigh) who happens to be Ben’s girlfriend; only that, over the course of their journey, she and Kemp start developing mutual feelings for each other. The crisp, violent film is therefore more about psychological warfare than actual fights, though it still boasted of some memorable action sequences culminating in a brutal climax.

Hey Shubhajit, yes you nailed it that this is a tough, violent Western. It's sometimes hard to pin down because it never wants to fit easily into a formula, but yes the harsh landscape is rugged, echoing the rugged story and characters.

THE NAKED SPUR is a psychologically potent study of tensions between a small band of men in mountainous terrain. It’s tightly composed, intelligent and gripping film that uses water as an agent of purification, while the landscape is as hostile as in any Mann film. As you note Shubhajit, in your superlative capsule, this represents the top rung of Mann-Stewart association, though I'd argue that in THE MAN FROM LARAMIE their work together is every bit as memorable. And yes, as you also assert, Ryan is at his villainous best. I had the great fortune to see THE NAKED SPUR last summer at the Anthony Mann Film Festival in Manhattan, and I fell in love with this masterwork all over again with the big-screen canvas.

Thanks Jonny. I really liked the characters - their toughness & ruggedness, as you mentioned, echoing the ruggedness of their surroundings. Interestingly, the film's side characters seemed even more interesting than the lead.

Yeah, I do remember yous fascinating cover of the Anthony Mann festival that you'd religiously attended. The film's many psychological tussles were really excellently portrayed & captured. Ryan tried so many tricks along the way and his slyness even managed to earn him freedom for sometime. Yet he is a vicious psychopath to the core which we learn soon enough. I'll surely try & get hold of The Man from Laramie, which you mentioned was as good. Thanks a lot Sam.